Originally established in 1802 as a fort that sits high above New York’s Hudson River, today’s U.S. Military Academy at West Point is renowned as one of the most elite institutions in the country. As the 4,000 students study and train on the campus, they can’t help but absorb the academy’s storied past. Indeed, the entire central campus is a national landmark, home to buildings and monuments that honor and celebrate U.S. military history.

In 2017, the busy academy opened an impressive new barracks built to house 650 cadets. The six-story Davis Barracks was designed to provide modern amenities for the cadets while respecting West Point’s designation as a National Historic Landmark campus. It also had to be resistant to attack. AMBICO Limited became involved in the early stages of the project, working closely with the project architect to design and fabricate the entranceway’s blast-resistant door and frame assembly calculated to keep cadets safe in the event of an emergency situation such as a bomb blast. They also provided 14 smaller openings throughout the building. 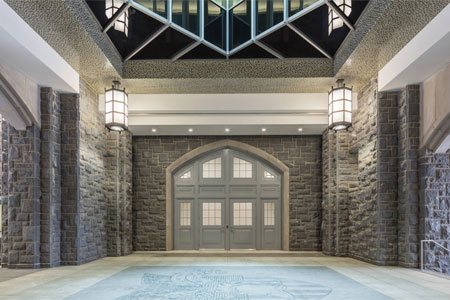 Because the building was designed in a military gothic style, project architect Clark Nexsen was resolute that Davis Barracks have an imposing entranceway with gracious curves and detailed recessed panels. Eight panels of insulated glass with muntin bars running both vertically and horizontally completed the look.

“If there were no blast requirement, this would have been a very challenging custom job,” explains AMBICO’s engineering manager Tim Berry. “But when you add the fact that we had to make this door structurally withstand blast loads, it became tenfold more complicated.”AMBICO’s engineers and technicians had to match craftsmanship with precise specifications to ensure the steel entrance doors met the government’s stringent antiterrorism/force protection (ATFP) blast criteria. Given that the gothic-style entranceway is 16 feet high and 17 feet wide, it was a technical challenge to fashion a complex internal structure and blast frame, all the while maintaining the striking design envisioned by the architect. Because the recessed door panels were so intricate, the architect provided a detailed cross-section of exactly how they wanted them to look. The team then took that design and prototyped it in the factory to make sure they could match the desired appearance while still meeting the blast standards. Its size meant the frame had to be fabricated in two mirrored sections, then shipped to the site where it was assembled according to meticulous instructions — directives that took into account both the integrity of the main door structure, as well as the anchoring system into the surrounding wall.

Once the AMBICO team was satisfied the panel profile was perfect, they turned their attention to the next challenge. “From the outside it looks like there’s nothing in there, but we had to fit the appropriate structures inside these panels to make them blast-resistant,” says Berry. And the outer arch of the entranceway, though impressive to the eye, was, for engineers, another test of their ingenuity. Everything has an arch — the outer frame, the panels, and the glazing beads. That meant each piece had to be uniquely curved to match exacting dimensions and templates, making sure that both sides of the frame matched the structural wall and formed a precise mirror image.

Having two frames presented a second test, forcing engineers to change their approach from a blast-resistant perspective. They had to treat the project as two separate blast-resistant frames, then run their computer models accordingly. After being transported to the site, the two frames were welded together according to AMBICO’s specifications, then painted. Everything came together beautifully; it’s impossible to tell that the structure is actually two frames.

It is also impossible to see the blast frame that ensures the door holds its ground in the event of a surge of pressure generated by a blast. From the outside it looks as if the door simply sits in the centre of an attractive stone façade.

In reality, the door apparatus is securely anchored into a structurally reinforced poured concrete wall (which is then finished with the decorative stone cladding). “All of that infrastructure is completely hidden from view for anyone going through the door, but as a designer it’s a challenge to determine how to attach the frame to withstand a blast,” Berry notes.

Because the architect required the door include eight glass panels, the final piece of the puzzle was making sure that, given the various sizes and shape of glass, it would meet blast loads (the glass is allowed to travel just 3.3 feet from the inside face of the door). Fortunately AMBICO’s in-house engineering staff was able to make those calculations, analyzing glazing in response to blast loads and engineering the appropriate supporting structures to retain the glass. It’s a specialty that sets the company apart from many of its competitors.

AMBICO has worked with the U.S. military for many years, both in the United States and abroad, fabricating door and frame assemblies for a number of their buildings and bases. Although every job presents different complexities, the company truly earned its stripes for the Davis Barracks project. The full project has gone on to win a number of prestigious awards, including two for engineering excellence from the American Council of Engineering Companies. AMBICO is justly proud of its role in contributing to the success of this forward thinking architectural vision. As 650 cadets rush through the noble entranceway each day, they’re passing through a door that embodies West Point’s long military history — and is carefully engineered to keep them safe.