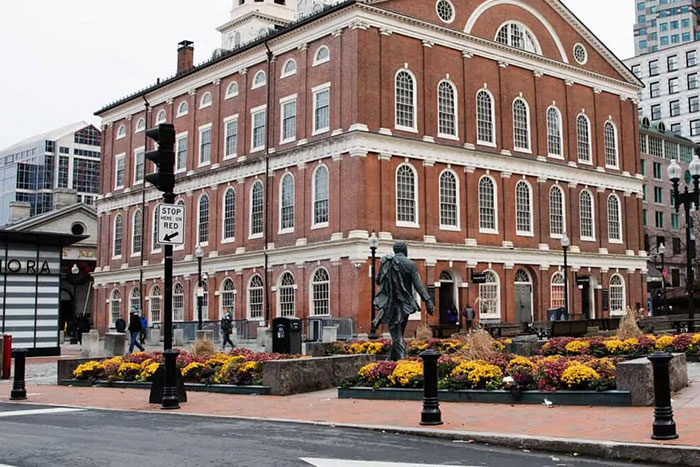 Winding through Boston’s downtown core is the historic Freedom Trail. The 2.5-mile walk is not just a tour of local interest: every stop along the trail was part of some important moment in the nation’s founding. A line made of red bricks draws the curious from site to site, while cast bronze markers identify the buildings of interest. Areas of interest include Paul Revere’s house, the Boston Common, and Faneuil Hall, built in the 18th century as a market and used as a political backdrop for announcements and arguments ever since.

To help manage modern traffic around these important older sites, the City of Boston undertook a revitalization program called “Connect Historic Boston” to update the nearby infrastructure. The Freedom Trail attracts 4 million people annually: having that many people walk, bike, or drive safely along small streets and heritage buildings requires thoughtful implementation.

At one point, the trail winds through an old section called the “Blackstone Block,” filled with cobbled one-way streets and alleys. This pedestrian-friendly portion opens onto the busy North St. that connects larger arterial roads. Crossing North St. brings the tourist to Faneuil Hall, a historic marketplace with ample outdoor grounds and seating.

The city chose to install protective bollards in the crossing area between these two blocks, to help maintain a pedestrian-friendly space. In a crowded downtown filled with visitors, the bollards are important preventing cars from inappropriately parking on the concrete surround of the 18th century public market. These bollards had to be appropriately sculptural for the rich traditional architecture of the area. The R-7553, cast in ductile iron and powder-coated a rich black, add to the atmosphere of the area while protecting those walking the trail, stopping for a picnic near the statue of Samuel Adams. The R-7553 has a clean, non-fluted body and a classical shape. It covers a security pipe of 4-1/2 inches. Each bollard weighs a solid 81 pounds.