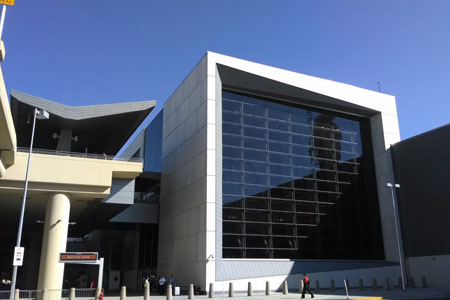 McCarran International Airport in Las Vegas, Nevada is one of the ‘Top 10’ busiest airports in the U.S. and among the ‘Top 25’ in the world. In 2012, the international airport opened its Terminal 3 expansion at 1.8 million square feet, making it the largest public works project in Nevada to date.

PGAL Architects led the project design, which entailed 14 new aircraft gates (six international swing gates) and terminal facilities for an existing 30-gate concourse. Over 100,000 square feet of StoneLite® panels were incorporated in an exterior rainscreen/open-joint application and also custom-fabricated for the design of the interior beams.

According to PGAL Architects, passenger circulation and wayfinding inspired the design of Terminal 3’s Fold Train ceiling and tilted roof. Passengers arriving by plane are visually directed into the building by primary and secondary entry points, which are emphasized aesthetically. Once inside, an undulating roof form guides passengers through the facility from ticketing counter to baggage claim.

The simplicity and repetitive nature of the Terminal 3 roof design reinforces the predominant passenger movements; it also serves to unify and collect the various functions occurring below, says PGAL Architects. StoneLite® panels were designed and installed in enlarged segments (3 ft. by 9 ft. panels) to accommodate the integration of mechanical systems and other utilities into the overall architectural vision.

As expected with an airport of this size, the project team faced several challenges. Shortly before installation, Stone Panels Inc. identified a 3.5-inch discrepancy in the framing at the northwest corner. Senior Project Manager James Medina met with the Stone Panels team to discuss possible solutions:

“The weight and maneuverability of the Stone Panels system allowed us to trim from the inside and fix the mistake without any corrective work by the construction team,” said Medina. “If you saw the corner today, you’d never know there was an issue.”

Medina also faced a time crunch for installation. By the time the contractor gave the green light, Stone Panels had no choice but to start a month behind their project schedule. However, with the ease of Stone Panels installation, the delayed start was hardly a setback.

“To be honest, my team made up the time so quickly, that we caught up to the general contractor and had to take another month-long break,” said Medina.

Even with these “setbacks,” Stone Panels still finished the installation seven months ahead of schedule. According to Medina, the contractor only had a one-page punch list, which was wrapped up in a week.

“That’s what happens when you work with a product that’s so well made,” said Medina.

In the end, Stone Panels saved the contractor $1.7 million, which was the savings in labor compared to dimensional stone.

“The real challenge is educating the contractor ahead of time,” said Medina. “With Stone Panels, the time savings and reduction of labor leads to significant money in their pocket.”

Over 100,000 square feet of StoneLite® Gascogne Beige Limestone was used in an exterior rainscreen/open-joint application and interior sealed joint application. The interior beam panels were architecturally designed and custom-fabricated to various angles and are a complicated feature.