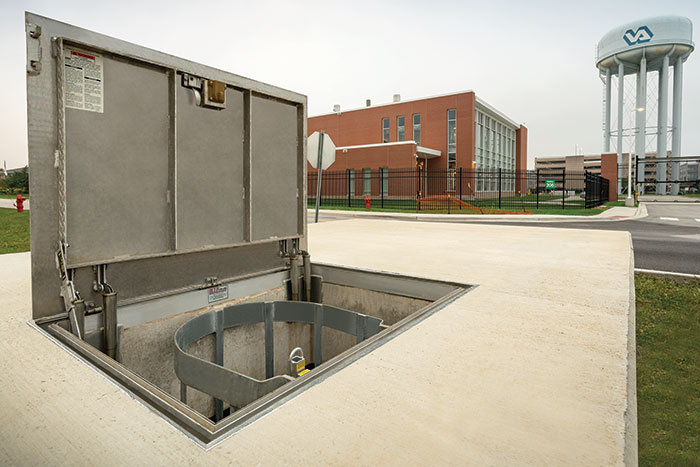 The hospital, which originally opened in 1921, was in dire need to replace a boiler plant that was nearly a century old. An 80-year-old 12-inch transmission main feeding the existing plan was among the units that were failing.

Architects started design on a new boiler plant in 2009, but flooding in 2010 of the Des Plaines River took out the existing boiler plant and exposed a major flaw in building a boiler plant below grade. The flooded plant was drained and existing systems repaired to allow the campus to remain operational until a new plant could be designed and constructed.

After years of design, government-requested cost-saving changes and 242 drawings submitted by architects, work on the new plant started in 2016. The scope of the project included the installation of four new boilers, an emergency diesel generator, and the construction of an underground steam distribution system.

“We worked with the design team and needed to install all new equipment,” said Mike Deis, the senior project manager for The Walsh Group, the general contractor for the project. “Some of the buildings had deteriorated during the flood. The distribution system was directly buried, and was not enclosed in a concrete tunnel. All the tunnels needed to be replaced for the steam system on the campus.”

Mechanical Inc. of Freeport, Illinois installed the mechanical products. Due to the complexity of the project on the 147-acre campus, the VA employed the U.S. Army Corps of Engineers to assist with construction.

BILCO floor doors used in the project are frequently found in exterior applications where there is a concern of liquids entering the access opening. The doors include a channel frame, aluminum frame and engineered lift assistance for one-hand operation. Illinois Construction Specialties procured the doors for Walsh.

Workers ascend and descend on ladders equipped with 15 LadderUP® safety posts, also manufactured by BILCO. The safety posts feature a telescoping design that is spring balanced for easy operation and includes adjustable mounting hardware that accommodates virtually any ladder rung size or spacing.

“We do quite a bit of work with BILCO for this application, especially in maintaining a fire rating or if there is a tank underground,” Deis said. “They service the entire country, and we do work all across the country. We know that we can count on them to service this product.”

The new central utility plant was completed in the spring of 2019. The switch from the existing system to the new system took several months to execute. Demolition of the previous system began in the fall.

The hospital recorded more than 850,000 patient visits during the fiscal year in 2017, providing care to more than 57,000 veterans from three counties in the area. It was listed in the National Register of Historic Places in 2013 and is named after the son of Chicago lumber magnate Edward Hines, who purchased the property in 1917. Edward Hines Jr. died while serving on the front lines in France during the opening months of World War I. The hospital was the first VA hospital to be named after a person.