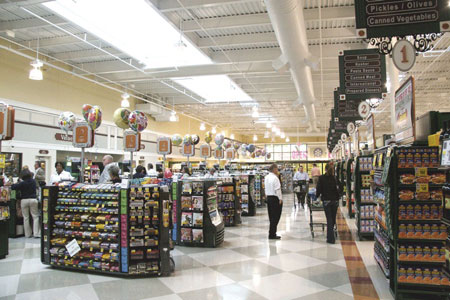 Harris Teeter, a wholly-owned subsidiary of The Kroger Co. (NYSE: KR), was co-founded in 1960 by North Carolina grocers W.T. Harris and Willis Teeter. Harris Teeter operates over 230 stores and one fuel center in eight states and the District of Columbia.

In addition to its retail stores, Harris Teeter also owns grocery, frozen food, and perishable distribution centers in Greensboro, NC and Indian Trail, NC, as well as a dairy in High Point, NC.

Harris Teeter is headquartered in Matthews, NC and has approximately 28,000 associates.

Harris Teeter's success is closely linked to its willingness to balance business practices with its environmental responsibilities, and the company pledges to provide shoppers with the highest level of customer service while implementing sound environmental practices in its stores, corporate office and community.

The company strives to minimize its impact on the environment and promote sustainability in all aspects of its business including products & sourcing, design, logistics & distribution, and post-consumer and post-industrial recycling & packaging.

Harris Teeter is part of the Environmental Protection Agency's GreenChill program to promote the use of environmentally friendly refrigerants. Harris Teeter also encourages its suppliers to incorporate green practices into their day to day operations and will continue to be a leader in environmental stewardship.

GreenChill is an EPA partnership with food retailers to reduce refrigerant emissions and decrease their impact on the ozone layer and climate change.

National Gypsum is one of the largest gypsum board producers in the world. Headquartered in Charlotte, NC, the company is a full-line supplier, recognized in the industry for customer service and product quality.