Located in the heart of downtown Chicago, the Montgomery Ward Building of Northwestern University, more commonly known as the Ward Building, houses the school’s medical and dental divisions as well as several high-profile research labs. Originally built in the mid-1920’s, the university wanted to upgrade the building’s original wood windows with a high performing thermal solution that required minimal maintenance and would also help retain the classic historic appearance of the university’s campus.

Additionally, matching the building’s aesthetic was a prime concern for the university and the project’s architects, Chicago-based architecture and engineering firm Wiss, Janney, Elstner Associates, Inc. (WJE). To meet this, and the many other functional and aesthetic needs of the project, Traco’s TR-9460 4" Fixed over Fixed Architectural Thermal Aluminum Windows were selected for nearly 1,000 openings throughout the building. 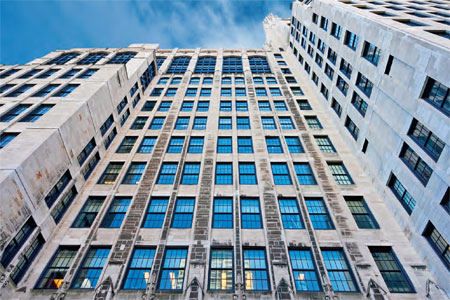 “We needed a product that could easily be installed from the exterior that also matched the building’s design,” said Anthony Cinnamon, project architect with Wiss, Janney, Elstner Associates, Inc. “The TR-9460 matched so well with the existing design, and the engineering quality of the product was just what a building of this importance needed.”

Unlike a typical university building project, the construction process for this facility was subject to high security and strict deadline requirements that wouldn’t disturb the student and faculty residents of the building.

Built of Indiana limestone over a concrete and steel framework, the Ward Building stands 14 stories tall and incorporates many modernized Gothicstyle features, similar to those used throughout the main Northwestern University campus. In 1927, a journalist for the American Architect commented that, “Despite the huge size of the building, the architect had provided ample light, air and ease of access.”