Ohio State's football team has almost two dozen players from Northeast Ohio on its roster, but it's Notre Dame that is surrounded by a piece of the region.

Canton-based Belden Brick Co., which has roots dating to the late 19th century, has been working on projects on Notre Dame's campus since 1935. The latest involves work on buildings surrounding the famed stadium in South Bend, Indiana.

"We do pretty much everything that's out there," John Belden said. "We supply a lot of brick there." 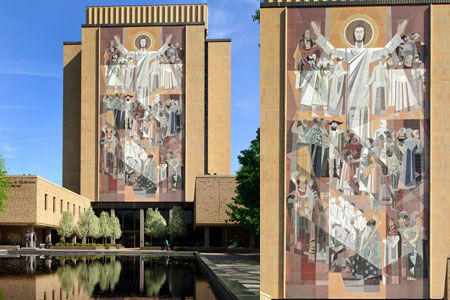 Northeast Ohio has funneled both schools with players, but the Irish have a foundation laid by the Ohio company, brick by brick.

The company's chief executive officer, Bob Belden, has a special tie to Notre Dame: He played quarterback behind the likes of Joe Theismann, Terry Hanratty and Coley O'Brien in the 1960s. Belden was drafted by Dallas and spent two years with the Cowboys behind a couple of other good quarterbacks – Roger Staubach and Craig Morton.

Notre Dame is undergoing its largest building project, a massive undertaking called the Campus Crossroads Project. Bob Belden said his company's involvement called for 1.5 million to 1.75 million bricks. The buildings are on the west, east and south sides of the stadium, leaving the north end open "so everyone can still see Touchdown Jesus."

Touchdown Jesus is the mural adorning the side of the library facing the stadium. The mural – actually called "Word of Life" – was dedicated in 1964. With raised arms it appears as if Jesus is officiating, signaling a touchdown, extra point or field goal at the Holy Cross university.

"We've done big jobs like that, but (this one) is a feather in the cap for us," John Belden said.

"It's a pretty big project," Bob Belden added. The project is expected to continue into 2017.

Despite the company's connections to the South Bend university, they don't play favorites. Belden has done work at colleges throughout the state, including Ohio State, University of Akron, Miami, Ohio and others.

With a fifth generation of family members attending Notre Dame, Belden is a common name at a few games every year.

Despite the family's and company's deep roots in Northeast Ohio, the ties to the university 300 miles away remain strong.