Utilizing PENETRON ADMIX in the underground concrete structures, the initial construction phase of Santiago Metro’s new Line 3 in Chile is now coming to a close.

One of the most modern subway networks in Latin America – and the second largest after Mexico City - the Santiago Metro currently maintains five lines with 108 stations and a total rail length of 103 km (64.0 miles). The first section of the Metro’s new Line 3 will take on its first passengers by the end of 2017. Comprising 22 stations on 21.7 km (13.5 miles) of track, the Line 3 will be completed by 2020. It will connect the northern part of Santiago (Huechuraba) with the city center and central business district and the eastern part of the city (Ñuñoa, La Reina and Peñalolén). 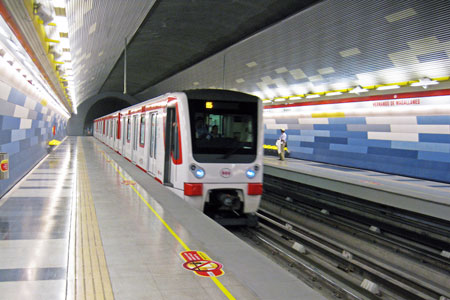 Picking up speed: The new Line 3 extends the Santiago Metro network by 21.7 km (13.5 miles) of track connecting 22 new stations. The tunnels and stations are waterproofed with PENETRON ADMIX.

The technical guidelines for the Santiago Metro project originally specified a competitive product. At the request of the Ferrovial Agroman Chile construction company, PENETRON Chile met with Arcadis, the project engineers and advisors to the Santiago Metro. After reviewing various studies, recent project results and learning about PENETRON crystalline technology, Arcadis selected PENETRON ADMIX as the most effective waterproofing solution for the tunnels and stations.

“A key factor in our success was the high level of support by our local team under Domingo Lema,” adds Jozef Van Beeck, Director, PENETRON International Sales & Marketing. “The PENETRON team has extensive experience with design mix and shotcrete applications. They were able to show that PENETRON ADMIX was an ideal solution.”

Ultimately, PENETRON ADMIX was used to treat over 33,000 m3 (43,200 cubic yards) of concrete during the initial phase of construction.

“Having our product – and PENETRON crystalline technology – certified for enhanced concrete durability, self-sealing of cracks and waterproofing was a convincing factor in the engineers’ choice,” concludes Mr. van Beeck.