The March 2021 opening of the Nuovo Teatro Civico Roberto De Silva (New Roberto de Silva Municipal Theater) is a highlight in the revitalization of Rho, a city in the Lombardy region of Northern Italy. PENETRON ADMIX, a permeability-reducing concrete admixture, protected the below-grade structures against the high groundwater encountered at the construction site. 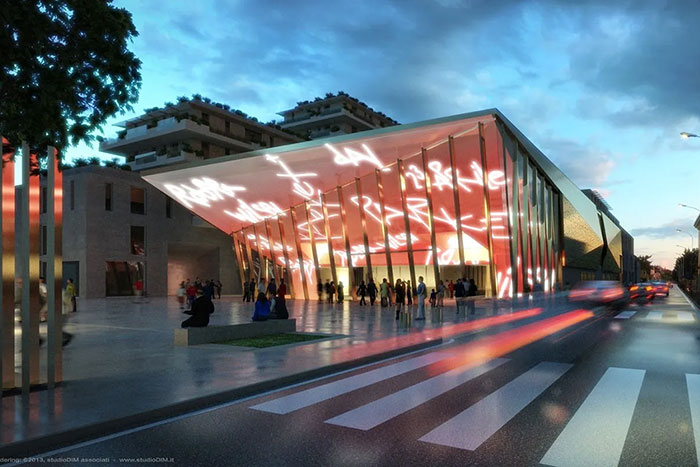 Already inhabited during Roman times, Rho is one of the most ancient towns of Lombardy. Today, Rho is a city of over 50,000 inhabitants, home to the Fiera Milano (exhibition center), and is only 14 km (9 miles) away from Milan, making it part of Milan’s greater metropolitan area. The New Roberto de Silva Municipal Theater is the centerpiece of an urban renewal program focused on revitalizing the area around the Via Dante Alighieri, close to the center of Rho.

“The design of the new theater was conceived as a kind of ‘magic box’ that could be adapted to various activities – performances, exhibitions, or conventions – by creating a diverse range of dimensions and environments,” explains Enricomaria Gastaldo Brac, CEO & Managing Director of Penetron Italia.


Saving Time In The Construction Schedule

Because of the high groundwater conditions at the construction site, the contractor required an effective waterproofing system for the below-grade concrete structures, which include the theater’s foyer, the conference areas and orchestra pit. A PVC waterproofing membrane system with post injection was originally specified in the construction plans. However, the installation of this system turned out to be too unwieldly and time-consuming. The local expert from Penetron Italia proposed an easier and proven waterproofing solution comprising PENETRON ADMIX to treat the concrete mix, and PENEBAR SW waterstop strips to permanently seal the resulting construction joints.

As a crystalline waterproofing and permeability reducing admixture, PENETRON ADMIX reacts with moisture in concrete to generate a crystalline formation throughout the pores, micro-cracks and capillary tracts found in concrete. These non-soluble crystals permanently self-heal microcracks, pores and capillaries against the penetration of water or liquids from any direction, substantially reducing concrete permeability. In addition, Penetron crystalline technology also provides low shrinkage and self-healing properties, ensuring permanent protection.