A vehicle can be many things—a means to get from one place to another, a status symbol, a collector item. A deadly weapon isn’t usually the first thing that comes to mind. However, a vehicle’s mass and its ability to accelerate quickly and travel at high speeds, the consequences of even small driver errors can cause damage and injury—and worse—to pedestrians and property.

There are solutions to these problems. Carefully planned parking lot design and safety bollard installations can mitigate these risks, increase site security, and boost pedestrian confidence.


Storefront crashes in Canada and the United States

According to Rob Reiter, Storefront Safety Expert and co-founder of the Storefront Safety Council, vehicles crash into commercial buildings as many as 20,000 times per year, or about 60 times per day, causing approximately 4,000 serious injuries and 500 deaths per year. For convenience stores alone, there are 20 crashes per day. “7-Eleven, as a chain, with their 7,000 or so stores, gets hit 1.3 times per day, nationally,” says Reiter.

Reiter’s findings come from years of compiling crash data, but since he looks solely at commercial buildings, they are only a portion of the bigger picture. “When I say there are more than 20,000 accidents per year in the US and Canada for what we call ‘storefront crashes,’ there are way more than double that when you also consider crashing into apartments and houses.” This is because there are far more residential buildings than commercial. In addition, almost all vehicle trips start and stop at someone’s home—and not all trips involve going to the store. “People get drunk and drive home way more often than they do to stores,” says Reiter.

“The term ‘storefront crash’ has the advantage of being descriptive and the disadvantage of not taking into account lots of other kinds of crashes—such as those involving bus stops and office buildings,” says Reiter. “As a label, it has its good points and its bad points. It conveys to people the notion that there are areas where people live, work, eat, and play that are incredibly vulnerable.” 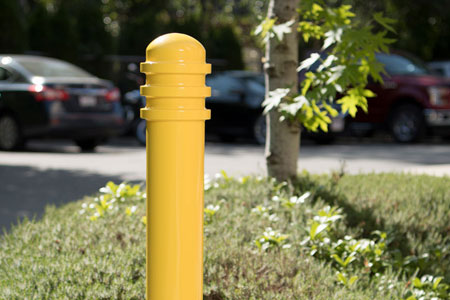 Reiter has an extensive background in high-security applications involving vehicle intrusions. His work spans a range of projects that include embassies, military facilities, high-value civilian buildings, power plants, government buildings, and streetscapes. While much of his work has involved protecting buildings from intentional threats, he found that accidents are far more common.

Why do vehicles unintentionally collide with buildings? Reiter attributes these accidents in part to pedal error or distracted driving.

What is pedal error? Typically, pedal error occurs in one of two situations:
Parking lot design can also have a huge impact on site safety. For pedal error incidents, nose-in parking along buildings or storefronts can be a risk. In the event of driver error, a vehicle will plow into whatever the stall is pointed at, whether it be an exposed patio, glassed dining room, retail area, or office space.

“Most of the big-box stores, your Costcos and Walmarts, have designed away nose-in parking for quite some time. It’s generally smaller stores, convenience stores, and strip malls, that still embrace this design,” says Reiter.

Drive aisles can be another big issue when they point directly at store entrances, many of which feature wheelchair ramps. “There is a danger that drivers proceeding down drive aisles while looking for a parking place might lose control of their vehicle for whatever reason, and they just keep going right up the ramp,” says Reiter. “It seems like it shouldn’t happen as much, but it happens a lot.” 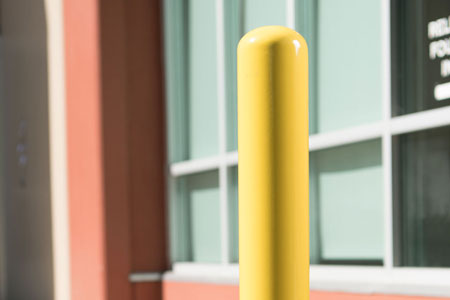 “To me, whether the accident happens because the driver hit the gas instead of the brake, put it in drive instead of reverse, was drunk, spilled hot coffee in their lap, or was busy watching TV in their car, accidents where vehicles crash into stores are, in fact, foreseeable,” says Reiter.

Even the most careful drivers can be susceptible to error. The most rigorous driving regulations won’t prevent this. It’s important to recognize potential hazards before they occur, and find design solutions to reduce or mitigate the risk that they create.

Though adding crash protection to storefronts can bring to mind images of fortresses, bollards do not have to be an eyesore. Safety bollards can provide ornamentation to a site while still adding security, creating a safety buffer between roadways and the area beyond. The “area beyond” can contain anything from expensive merchandise or machinery to a family of innocent bystanders—the protection is well worth the cost.

Depending on the severity of the impact risk, added security can be provided using steel pipes, which are embedded in the ground and reinforced with concrete. These are designed to withstand higher impacts from vehicles, and can be covered with safety bollards or other plastic or metal decorative covers to improve aesthetic appeal and increase visibility for drivers. 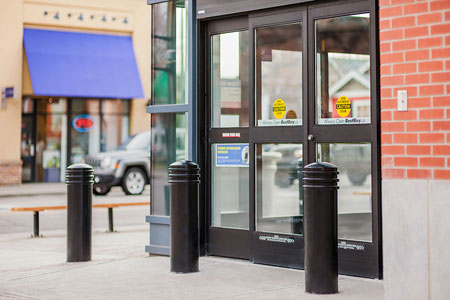 Why the lack of protection?

Reiter has collected vehicle-into-building data for years, allowing him to compare annual information to identify trends. From what Reiter has seen in previous years, the incidents and the resulting damage to people and buildings have been increasing. Despite the constant risk and the many expensive legal settlements, there are still many properties that don’t implement effective safety measures.

“There are people and businesses that have put bollards in front of their stores for generations. And there are people who will only do it when there’s a local code that requires them to. And that’s not going to really change until the local codes catch up,” says Reiter.

“This is a safety issue not unlike fire sprinklers were a hundred years ago. Or like ADA (Americans with Disabilities Act) 30 years ago. Everybody is still trying to find their way.”

When you consider all of the design elements engineered to protect people in cars, it makes sense to ensure similar protections for people outside them as well. “Cars are way safer,” says Reiter. “You’re in a steel box. You have crumple zones, you have air bags, you have seatbelts, you have shoulder belts, you have energy-absorbing steering columns, you have so many things in a car that’s been built in and designed to protect the driver. But a person sitting at a table in Burger King, when a car comes in, they have nothing to protect them.”

Reiter has seen success working with local codes, but general education and awareness make up a large part of his work with the Storefront Safety Council. In 2016, the Council began the Storefront Safety Initiative, aimed specifically at teaching property owners, local governments, and insurance companies about safety bollards and other barriers—how to plan, specify, and order them. “It’s an attempt to help people understand that the solution is there,” says Reiter. “Hopefully local governments and state governments will use the information provided as they undertake their own local safety ordinances.”