”The Great Wall” of New York City Transit by EXTECH 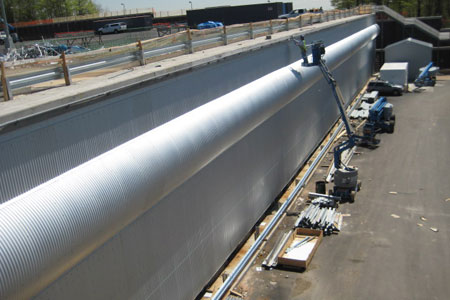 Staten Island needed a new bus depot, and when New York City Transit looked to renovate the space, a large retaining wall made of steel pylons and 30-foot high steel channels, the transit company found they were faced with “the ugliest wall in North America.”

Contributing to the unsightliness was a series of “walers” sticking out of the wall about 2-feet for its entire length. These whalers connected to the cables that had been laid inside the earth to hold the wall into position, and however ugly, were necessary for the wall’s stability.

As New York City Transit had only specified that the wall was to be weather resistant, EXTECH contributed innovative ideas on how to accomplish this, and leaned on our industrial experience to suggest simple, economical, corrugated Galvalume sheets screwed to light gage Galvalume girts, which were in turn screwed to the steel pylons.

Still though, the protruding walers presented a major problem when improving the wall’s appearance. Someone suggested building a steel framing so that the sheets would span over the walers, but this would have been a major undertaking that would have contributed considerably to the cost. EXTECH instead specified the same corrugated Galvalume sheets that were cladding the main portion of the wall, but suggested to have those sheets were custom-curved so as to ‘jump over’ the walers.

These curved panels, protruding from a flat wall, made a dramatic statement on the former eyesore, and after a while we began to call this project “The GREAT WALL”. Coming up with a design solution that was the least expensive way to accomplish the task set before us, we were please to present the result, a transformed wall that evolved from a row of rusty pylons to a sleek, continuous wall with a dramatic and impressive horizontal element running along its entire 500-foot length.

The Project Architect at NYCT expressed his pleasure about the wall and said that he appreciated the fact that it is not only functional, but architecturally meaningful.

Since its inception in 1975, EXTECH, Exterior Technologies Inc. has developed more than 20 unique systems for the architectural, industrial, transit, and government markets and owns at least 13 active patents. Extech is proud of our dedicated staff which includes both engineers and architects with focus on polycarbonate solutions for industrial and architectural applications. We also participate in LEED credits. Our parent company, Voegele Co. Inc., is a general contractor which emphasizes industrial and commercial building exteriors. All fabrication is done on-site with care and expertise. Our own building is a testament to the fabrication and use of cellular polycarbonate for daylighting, durability and quality.