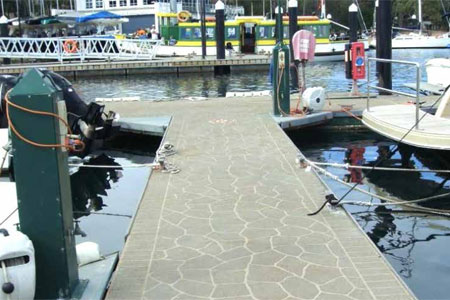 Proof of Xypex permanence and its ability to enhance the durability of concrete structures was clearly evident in a recent review of the Xypex-treated precast concrete used to construct the Cronulla Marina floats in Gunnamatta Bay near Sydney, Australia. The results of this in-depth review indicated that the Xypex Crystalline Technology not only waterproofs and enhances the concrete, but also continues to work throughout the life of the structure, extending the design life beyond the original specification.

The marina is situated with a southerly aspect to its layout, exposing the concrete floats to continuous aerosol chlorides. The floats are also within the splash zone, and under conditions described by the report as ‘a severe marine environment’.

The marina floats were cast in October 1994. They were designed to be 100 mm (4 in) thick allowing only 40 mm (15/8 in) of cover over the pre-tensioned wire strands. The floats have foam flotation to the soffit and the top surfaces of the floats are a nominal 350 mm (14 in) above sea level. This design meant that the reinforcement cover would not meet the normal requirements for a severe chloride exposure environment of this type. Therefore, additional chloride protection was deemed necessary and Xypex Admix was chosen to provide this.

Mahaffey Associates of Australia tested concrete that incorporated the Xypex Admix against both a concrete control sample and concrete with the same mix design that contained a pore-blocking admixture. Testing results were noted as follows:

“From this test it is apparent that concrete containing Xypex admix will have a better chloride diffusion resistance than concrete made with type SL cement, particularly if the concrete is given 7 days curing. Further, Xypex treated concrete performs significantly better than both plain cement and concrete containing a pore blocking additive when treated using a standard full immersion chloride ion diffusion test. This suggested that there are applications where the durability of concrete for marine applications can be enhanced by the use of Xypex admix in the concrete.

By observation of treated Xypex treated concrete used in the field, it is also apparent that the material has the ability to self heal should cracking occur. This is a characteristic that is of further benefit in concrete that is exposed to aggressive environments.”

In 1998, a condition-survey of the Jetty by BCRC (Durability Consultants) was commissioned. It included a visual inspection, chloride penetration and half-cell testing. The results were excellent and confirmed that, in high-chloride environments, Xypex-treated concrete outperforms untreated concrete. The indicators were low chloride diffusion rates and half-cell equipotential mapping that showed an insignificant half-cell potential gradient over the slab area.

Testing of the same properties was commissioned again in May 2013 after 19 years of continuous service. The same tests and inspections as conducted in 1998 were performed by BCRC. While chloride contents increased in the top 20 mm (3/4 in) of the concrete, the chloride content deeper into the slab was well below that which would promote corrosion. Half-cell results again showed an absence of any significant potential gradient over the slab, thus indicating a lack of corrosion activity.

The key objectives of the testing were the assessment of “concrete durability”, “chloride permeability” and “performance life”.

A comparison of results for the two sets of identical testing taken 15 years apart highlights the following:


Many independent lab tests have indicated that Xypex Crystalline Technology has the ability to improve reinforced concrete’s resistance to chloride induced corrosion. This recently completed 19-year survey of the Cronulla Marina floats is an excellent example of ‘field-performance’ supporting laboratory results.