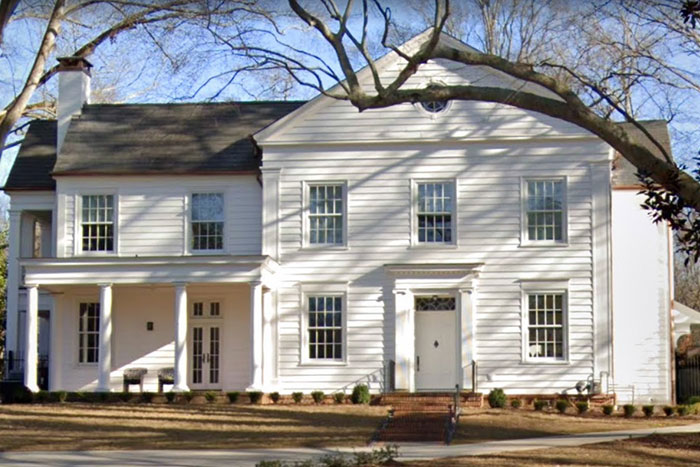 This 1915 home, designed by renowned Atlanta architect Neel Reid, is located in the historic Druid Hills neighborhood. It was updated by owner and architect Sheila Lee Davies, AIA, in 2019. The full renovation included the main house and a cottage, and the addition of a new meditation pavilion, swimming pool and garage. Persistent water seepage in a cast-in-place concrete tunnel underground walkway linking the house to the pavilion was sealed with Xypex crystalline waterproofing products. When the Druid Hills district was designed in the late 1800s by America’s premier landscape architect, Frederick Law Olmsted, it was intended as one of Atlanta’s first suburbs (fig 1). As the city rapidly grew, this affluent planned community transitioned from a suburb to a magnificent urban neighborhood located close to the city center.

Today, the Druid Hills Historic District has some of the finest examples of period architecture in the state of Georgia, including homes that range from cottages to mansions in a variety of styles such as Georgian, Tudor, Jacobean, and Italian Renaissance.

When purchased by Davies in 2016, the property was overgrown and littered with several dilapidated accessory buildings, as well as an unsound Folk Victorian cottage that is believed to be one of the oldest residences in Druid Hills.

“I have to say, the property was in horrible condition when we bought it,” notes Davies. “Little maintenance had been done, it was overgrown with invasive species, and there were accessory buildings everywhere.” 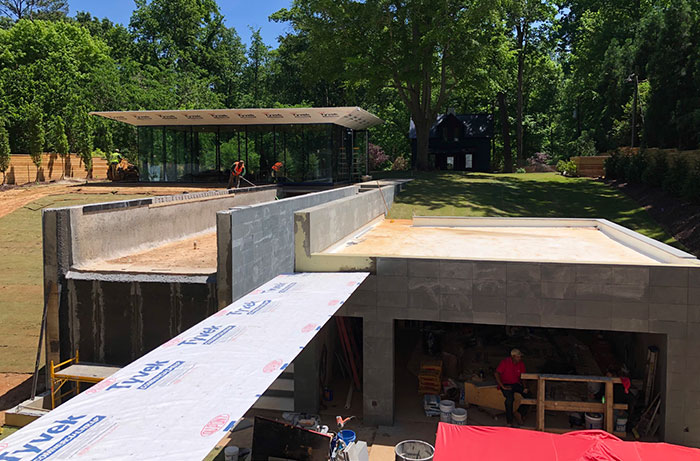 The generous space between the main house and the restored cottage at the rear of the lot provided an opportunity to introduce a modern structure that would complement and enhance the historic site. Davies designed a glass meditation pavilion, featuring a surrounding infinity pool and associated garage (fig 2).

“I wanted the pavilion to be transparent; to be able to see through it and have multiple layers of reflection of the background and foreground,” she explains. “Yes, the house was designed by a famous architect and if he were around today and built an addition, he would probably use modern materials and not just duplicate the original home.”

The pavilion addition was tied to the original house via above-ground stairs and walkway as well as an underground hallway from the new garage to the basement of the pavilion. All of the below ground structures and the garage were built using poured-in-place concrete. All exposed exterior concrete surfaces were finished in slate to echo the roof of the original house. The walls of the underground hallway were finished in stucco. 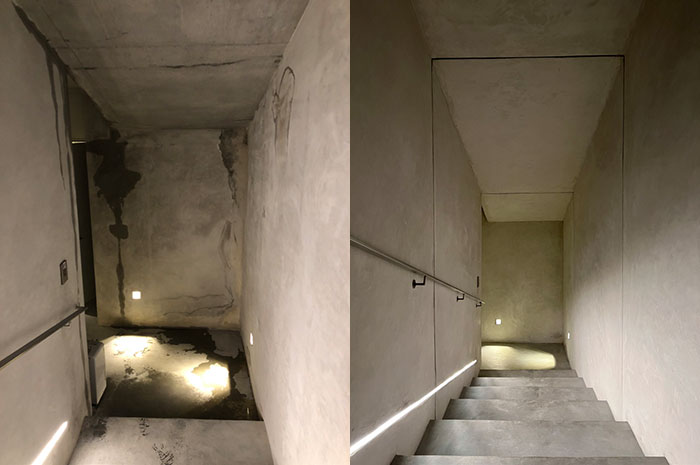 In late 2019, as the project was nearing completion, water seepage was observed inside the underground walkway, which ran from the garage, under the above-ground sidewalk, adjacent to the infinity pool and into the basement of the pavilion (fig 3). “It wasn’t like there was a single hole in the wall we could point at and fix,” notes Davies. “It was seeping from several locations. We looked at multiple areas where we thought the moisture might be originating. It seemed like we tried everything to stop the leaking—additional drainage and waterproofing—but nothing was working.”

In December 2019, Davies discovered Xypex crystalline waterproofing solutions and brought it to the attention of her contractor, Jeff Darby of Darby Construction, Inc. Darby contacted the Xypex regional representative Jim Vaughan who met with Davies and Darby at the project site to assess the situation.

“Water was penetrating from the left and right sides of the tunnel, especially along joints and some cracks,” says Xypex’s Vaughan. “Water was also ponding at the bottom of a set of stairs in the hallway.”

The water leakage became a more urgent problem as the Atlanta area received near record amounts of rain from December 2019 through April 2020—more than 35 inches or about 60% of the city’s annual precipitation.

“We essentially ran out of options at that point,” Davies notes. “I thought Xypex crystalline waterproofing made sense. We read about successful projects around the world using Xypex and thought if this can work for the St. Louis arch, it can work for us!”

Xypex Concentrate contains a mixture of Portland cement and active proprietary chemicals that diffuse into the concrete substrate and react with water and the constituents of hardened concrete to cause a catalytic reaction. This reaction generates a non-soluble crystalline formation throughout the pores and capillaries that exist in all concrete.

In this way, water and other liquids are prevented from penetrating the concrete from any direction. Laboratory studies have shown that the crystalline formation of Xypex Concentrate can penetrate up to 12 inches (30 cm) below the concrete surface, providing deep permanent protection.

Xypex Patch’n Plug, a fast-setting hydraulic cement for concrete patching and repair, was used to fill all wall/ceiling and wall/floor joints. Patch’n Plug provides the same crystalline technology as other Xypex products. Xypex Megamix I & II were also used to fill any voids found in the concrete. Megamix is a repair mortar based on Xypex Crystalline Technology.

Tate Waterproofing assured the proper curing of the Xypex products by keeping the treated surfaces moist for several days after application. Tate used a portable water mister to wet the surfaces three times per day.

Xypex needs time to diffuse into the concrete surface and begin crystalline growth. This period can vary depending on conditions, hydrostatic pressure, and other factors. In the case of 799 Clifton Road, visible improvements in water seepage were observed within a week or two and the hallway was 95% dry within about a month, notes Xypex’s Jim Vaughan (fig 5).

According to the property owner Davies, the subterranean hallway was fully dry after about three months. “It has been over a year now and there has been almost no moisture in the underground hallway,” Davies notes. “I wish I’d found Xypex sooner. We could have avoided some of the other solutions we tried. I’m a happy customer to be sure. I would highly recommend it to anyone attempting a similar repair project or building a new structure with a basement.”