The Marcus Garvey Apartments were built in the early 1970s in the Brownsville section of Brooklyn, NY. At the time, they received major attention for their innovative urban planning approach to low-rise, high-density affordable housing. The complex included duplex apartments with private backyards or terraces, and most apartments had private front doors that open onto a stoop. 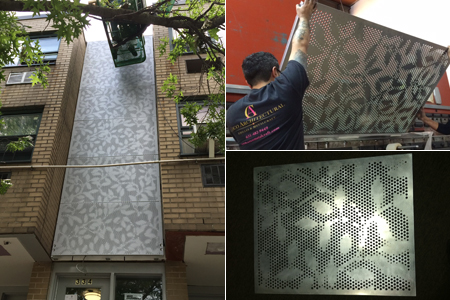 In 2014, the developers acquired the property with the promise of completely renovating the apartments, including the addition of façade panels, new kitchens, new bathrooms, and energy efficient lighting. This was a major undertaking at a price tag of $50 million for the 625 Mitchell Lama units. Mitchel-Lama Housing Program is a nun-subsidy governmental housing guarantee in the state of New York. It was sponsored by New York State Senator MacNeil Mitchell and Assyblyman Alfred Lama. From the very beginning, the developers planned to preserve the intended purpose of the complex and maintain it as an affordable place to live.

Coco Architectural Grilles and Metalcraft was commissioned to produce panels to compliment the new façade. Each panel had to be custom perforated and expertly welded in order to garner the Coco Architectural seal of approval. The panels were installed as the facility was being renovated in early 2015. Below you’ll find a rendering of the courtyard and pictures of the metalwork Coco produced. As you will see, Coco’s metal work are focal points at the Marcus Garvey Apartments and we were extremely pleased that we were able to play a part in the renovation of this affordable housing complex for the development team and the tenants of the apartments.