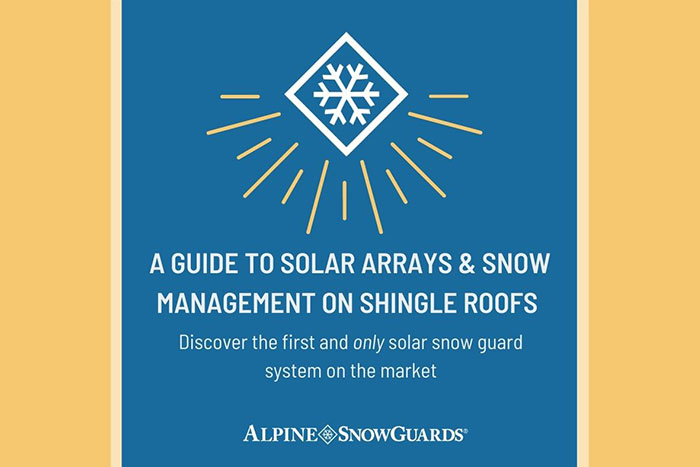 Alpine SnowGuards innovated the market’s first and only solar snow management system. With almost a decade of research and development, we’ve developed a three-part system that has been rigorously performance tested at our in-house research facility. Alpine’s Guide for Solar Arrays & Snow Management on Shingle Roofs explains how snow and ice interact on solar panels attached to shingle roofs. Let our expertise advise you on best practices and solutions to your immediate needs.

For more information about roof pitch, sliding snow, and snow loads, refer to American Society of Civil Engineers Guide to the Snow Load Provisions of ASCE 7-16.

Granules add friction to the surface of shingled roofs. That surface becomes frictionless when glass solar panels are attached to the roof. This means solar arrays in snowy regions with a pitch of 2/12 or greater will likely shed snow and ice in a sudden avalanche-like event.

Avalanching snow and ice off solar panels can cause property damage and injury to people and pets. Some examples of property damage include: plumbing vent pipes, gutters, lower roof areas, skylights, shrubs, cars, decks, and hot tubs, to name a few.

Areas in Need of Added Protection

At a minimum, points of egress, walkways, driveways, and gathering areas such as decks should be addressed with every new installation. Areas where gutters might get damaged, shrubs flattened, or roof vents broken should be considered by the project owner as worth taking a risk. These areas are often reconsidered after an array has been installed for a year or two and the owner has a better idea of locations that may justify added protection.

Alpine’s solar snow management system works to slow the sudden release of snow and ice from solar panels. Alpine strongly recommends installing a roof mount, pipe-style system for solar arrays with a 24′ minimum landing area of shingles below the array. If a 24″ landing zone is unavailable between the butt of the array and the roof’s eave, Alpine’s solar panel-mounted components should be installed to add friction points across the panels’ surface.