Fourteen stories below the bustling streets of New York City, a massive infrastructure construction project is in full swing. Tunnel-boring machines carve through acres of rock, shaping tunnels and platforms that are slated to carry an estimated 160,000 commuters a day between Queens and Manhattan.

The $10 billion project is known as East Side Access and includes a six-mile-long tunnel, underground subway stations and an impressive rail hub directly beneath the iconic Grand Central Station. Construction on the massive transportation venture began in 2007 and is slated to be completed in 2022. 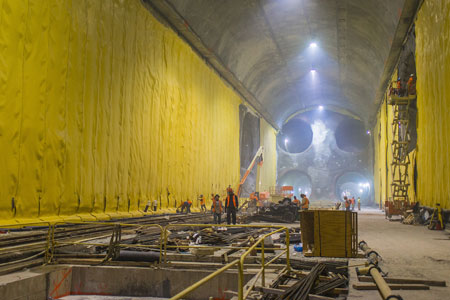 It’s a marathon project, and AMBICO Limited has been involved since near the beginning of the historic undertaking, working closely with the project architects at the Metropolitan Transportation Authority (MTA) in New York City to design and fabricate some 275 pressure-resistant door and frame assemblies calculated to keep commuters safe in the event of an emergency situation such as a fire or bomb blast. The doors protect the openings to “areas of refuge,” specially designed rooms set up between the tunnels to offer safety if a major emergency leaves commuters stranded.

An area of refuge has become a common requirement; transportation authorities need to be able to get people to safe areas if something happens, and the doors that protect the rooms are situated deep in the subway tunnels. The door assembly product that AMBICO developed is, therefore, highly specialized.

AMBICO was the logical choice to develop the pressure-resistant door and frame assemblies for East Side Access project. The company’s expertise is already known in New York City, where its expert team has been involved for 20 years with various transportation-tunnel projects. With the Holland Tunnel retrofit in the late 1990s, for example, AMBICO’s team of engineers and machine operators worked hand in hand with the New York and New Jersey Port Authority transportation professionals to design and fabricate doors designed to protect mechanical areas, as well as areas of refuge.

The East Side Access project enabled AMBICO to extend that expertise to a significantly more demanding project. Tim Berry, Senior Engineer at AMBICO, likens it to building a skyscraper in reverse—instead of overseeing a massive build above the ground, the MTA is undertaking an epic construction project deep beneath the cityscape.

The challenging environment means these particular pressure-resistant door and frame assemblies have unique performance requirements. Subway tunnels are narrow, so the door assemblies must be designed to withstand the unique, cyclical, pressure load resulting from each passing subway car that runs 24/7 with fast-moving trains, while the water that seeps through the walls is saline, so they must resist corrosion as well. And it’s essential that these doors meet rigorous NFPA fire performance standards.

The challenges are immense as these doors are one vital item in an ongoing transformation that has thousands of moving parts to it. AMBICO must be ready to fabricate the required doors on demand as the tunnels, platforms, and stations slowly take shape. That means that the AMBICO team has had to be ever-ready since 2007, planning the required pressure-resistant door and frame assemblies to exacting specifications and being prepared to supply them as construction targets come into focus. 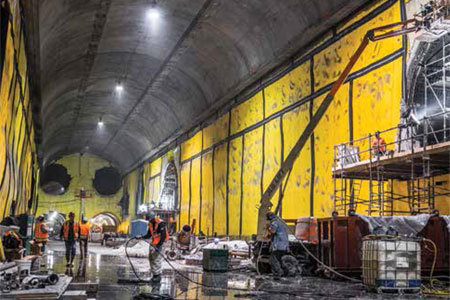 AMBICO has a reputation as an innovator in the specialized door market, a skill-set very much in demand for this particular project. However, working hand-in-glove with Deutscher and Daughter, a New York City-based distribution firm over 100 years in business was an absolutely essential component of the project's success. Not only was a local distributor’s presence essential to connect AMBICO to the broader project team, but according to company President Becky Deutscher, the small firm's installation and preventive maintenance services maintained over the lengthy warranty period were a key portion of the value-add that AMBICO and Deutscher proposed to the project owner.

Steve Peterman, AMBICO’s Director of Marketing, outlined some of the significant achievements incorporated into the design:


The end result is an extremely robust design that enables flexibility of the product in the field.

Because AMBICO has built its reputation over 60 years, the company is trusted by an international list of clients that includes both governments and private companies. That breadth of experience has led to contracts with many American concerns and a firm knowledge of American regulations and expectations. This particular contract for the East Side Access project stipulated that AMBICO comply with Buy America regulations.

AMBICO’s experienced professionals were well-versed in these provisions so they could quickly coordinate with the top suppliers in the United States for both the procurement of materials, the manufacturing of these unique products and the quality control necessary to assure 100 percent compliance with AMBICO’s design and manufacturing process makes working with an experienced supplier a simple process.


The Value of Time

A transit project is a long-term proposition and few have been in progress longer than East Side Access, an idea that was first presented in 1968. Shovels hit the ground in 2007 for the current incarnation of that long-ago plan, with completion planned for late 2022.

That’s a very, very long timeline. An established and focused company like AMBICO has decades of experience in the business and can look decades to the future, providing a seamless and hands-on approach to massive infrastructure projects with changeable timelines.

Judah Silverman, Vice-President at AMBICO, says the company excels at projects that involve a high level of coordination and service. The AMBICO team builds in travel and inspection visits, anticipating that high-level projects entail a very high level of care. Their commitment to East Side Access is nine years and counting, with AMBICO’s creative engineering team continually fine-tuning manufacturing and delivery requirements to match the client’s changing needs. It’s an approach that has already caught the eye of transit planners around the country who have contacted the company to discuss similar ideas as they study updates to their own transportation and security systems.

Meanwhile, deep, deep below the teeming streets of New York, the work continues apace. When the doors finally open in six years, revealing glamorous shopping concourses, sparkling platforms, miles of elevators and escalators, and a commuting shortcut between Manhattan and Queens, AMBICO’s pressure-resistant door and frame assemblies will all be in place, keeping commuters safe in the event of an emergency.

“Our ‘tunnel vision,’” says Silverman, “is one that is both advanced and forward-looking, a model for future transportation projects around the globe.”