America’s City of the Future Builds on PENETRON

PENETRON ADMIX was used to treat key structural elements in the foundation of the Paramount Miami Worldcenter. The monumental multi-day pour of over 14,000 cubic yards (10,705 m3) of concrete launched the initial construction phase of the project.

"We are building America's City of the Future," explains Daniel Kodsi, the Paramount Miami Worldcenter's developer. "Paramount is going to be a significant addition to Miami's skyline. When people arrive, this will be what they see in the center of the city. It's going to signal that you have arrived in downtown Miami." 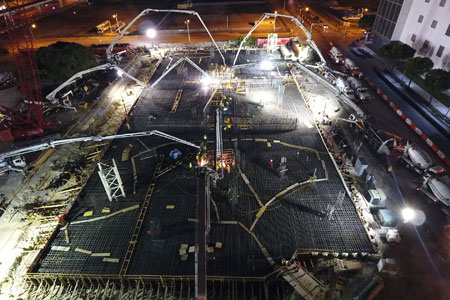 PENETRON ADMIX in the mix: The concrete for the Paramount Miami Worldcenter foundation flowed from six boom pumps at a rate of 500 cubic yards (382 m3) per hour.

Set for a grand opening in 2018, the Paramount Miami Worldcenter will comprise seven residential and office buildings, several hotels, including a 1,700-room Marriott Marquis and a new convention center, all laid out along a six-block long shopping and dining promenade in a gigantic retail, residential, business and transportation complex. The signature 60-floor, 700-foot tall (214 m), $500-million residential skyscraper will offer 512 luxury apartments with 10-foot ceilings and private elevators leading to the promenade and a Skydeck on the 60th-floor (with a 360° view of Greater Miami, Miami Beach and Biscayne Bay). Most units have outdoor living room-style terraces. Single bedroom units start at $700,000, and penthouses start at $4 million.

“This project is the second largest urban development in the country and Florida’s biggest building project ever,” adds Christopher Chen, Director of The PENETRON Group.

“In all, the ‘big pour’ delivered 14,000 cubic yards of concrete to the construction site,” adds Mr. Chen. “PENETRON ADMIX will provide permanent protection from any hydrostatic pressures the structures will be exposed to, while preventing corrosion of the embedded reinforcing steel.”