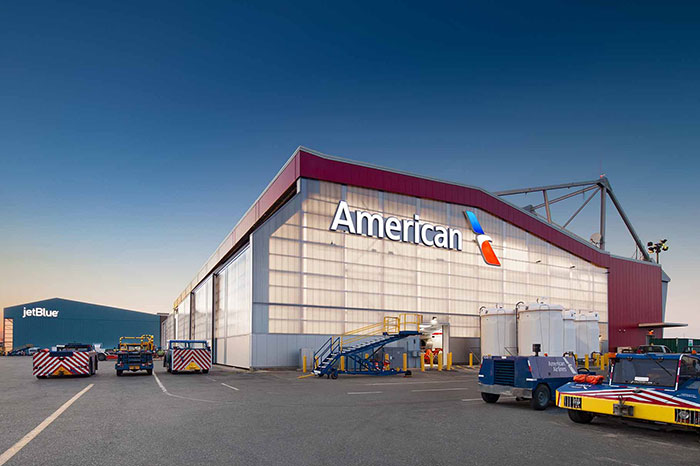 A Speedy and Modern Retrofit with EXTECH’s LIGHTWALL 3440

The Massachusetts Port Authority needed to renovate two maintenance hangars at Boston’s Logan International Airport. Originally constructed with metal panel walls and steel-sash glass windows, the New England winters and harsh aviation environment had taken a brutal toll on the buildings. The project called for glazing materials that could withstand the location while delivering good thermal performance, optimal daylighting, and long-term savings on energy costs. It also demanded a speedy installation so flight schedules were impacted as little as possible.

Fennick McCredie Architecture developed a unique design with these goals in mind. The design included a series of unique sloped doors glazed with 3 story tall polycarbonate panels, alternating between opal and clear. Many daylighting façades were considered but were passed over in favor of EXTECH’s LIGHTWALL system, series 3440. EXTECH’s 3440 was selected because its translucent panels provided optimal light transmission, and the lightweight material provided efficient operation of the sliding doors. Another key factor was EXTECH's ability to meet the challenge of the compressed project timeline.

“One issue we encountered was that the hangar facades needed to be strong and durable, yet lightweight and flexible so the doors could be easily opened and closed,” says Kevin Smith, EXTECH Director of Product Application and Development. “During the design process, we developed special reinforced clips which allowed the panels to handle test loads in excess of 100 P.S.F. This provided the durability and flexibility the hangars required.” EXTECH’s system provides a resilience that can withstand wake turbulence from engine startup while maintaining a lightness that reduces the cost of operating hardware.

Today, the renovated hangars at Boston Logan Airport stand strong (having endured one of New England’s toughest winters in recent memory) while delivering the natural light, energy savings, and impact resistance that only cellular polycarbonate daylighting systems can provide.