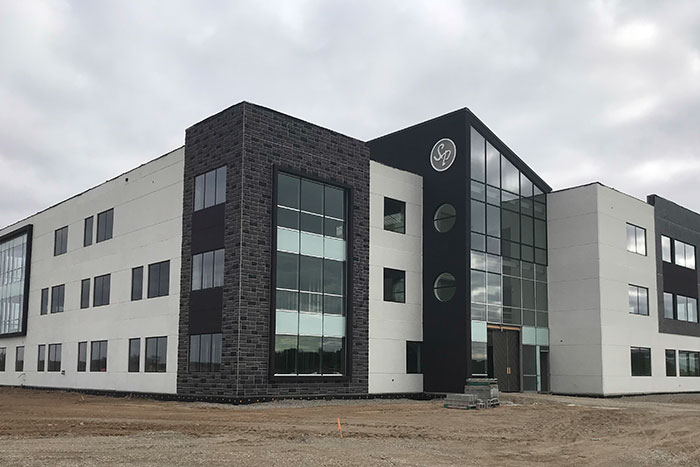 Project owners want to keep costs manageable, so contractors and their subs want the same. But when contractors can deliver more than just a focus on the budget, that is when true value happens on a project. Kingspan understands this well, which is why its products are created to deliver value to contractors and project owners in a number of ways.

Kingspan is the global leader in effective insulation and building envelope solutions for the construction industry. The company operates in more than 100 locations in 70 countries, employing more than 13,000 people. It was founded with a vision to lead in creating energy efficient buildings, and its dedication to sustainability is realized at every level of the operation and in every step of its manufacturing processes. Additionally, with its focus on innovation, Kingspan aims to always deliver efficiency, sustainability, style and safety. 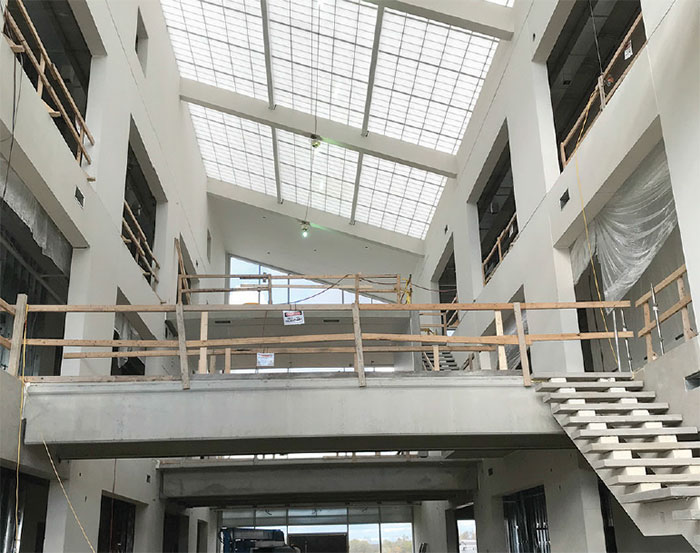 In fact, Kingspan is so dedicated to sustainability that it has made a promise to meet all of its need with renewable energy by 2020. It aims to accomplish this by reducing energy intensity by 31 percent, carbon intensity by 77 percent and energy costs by 38 percent, as well as using 69 percent renewable energy and generating 34.5 GWh renewable energy on-site. The company understands approximately 30 percent of global greenhouse gas emissions are attributable to buildings, and Kingspan wants to demonstrate the worth of its products while also making the business case for being a sustainable operation in today’s market.

“Together we have the opportunity to make our built environment more energy-efficient, attractive, adaptable, environmentally responsible and productive,” says Gene M. Murtagh, CEO of Kingspan Group PLC. “The way we build can be more effective and reach higher standards than ever before. We can make our buildings really work for us; consuming and generating energy smartly to become real investments in our future.” 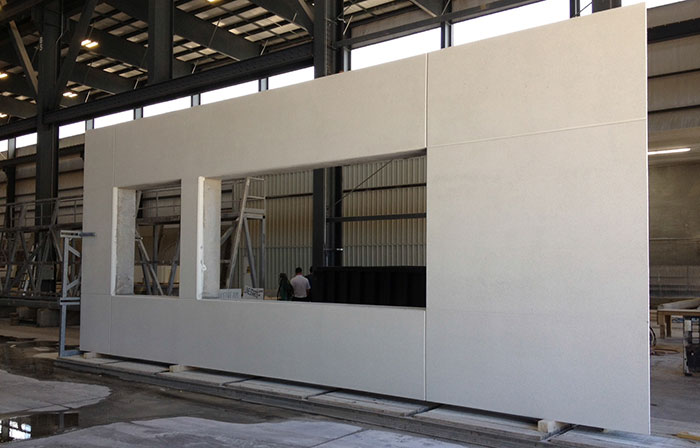 “The Kooltherm product line up has several variations for many different construction segments – precast, walls, roofs, floors, etc. – and there are different configurations to handle different applications,” explains Tom Macro, an independent sales representative for Kingspan. “Kingspan has been making the product for quite some time in Europe, but it introduced it to the United States and North America about two years ago.”

Kingspan Kooltherm Insulation Board is premium-performance product, manufactured with a blowing agent that has zero ozone depletion potential (ODP) and low global warming potential (GWP). When installed correctly, Kooltherm is known for providing reliable long-term thermal performance over the lifetime of a building, with the following characteristics:

“Building owners care about their energy consumption, especially now with energy bills increasing so rapidly,” says Andrew Wilson, Kingspan’s commercial manager for Kooltherm and “Kooltherm is high-performing insulation so it can help lower energy bills, and because it’s thin, it provides extra space and is easier for a building’s design".

"Kooltherm has outstanding fire and smoke development properties, which reduces the risk of fatalities in a building if there is a fire and allows more time for occupants to exit. It is also very good for sustainability because it's not made with harsh chemicals, so it can help owners achieve those higher-performing LEED credits. - Andrew Wilson, Commercial Manager for Kooltherm & Optim-R" 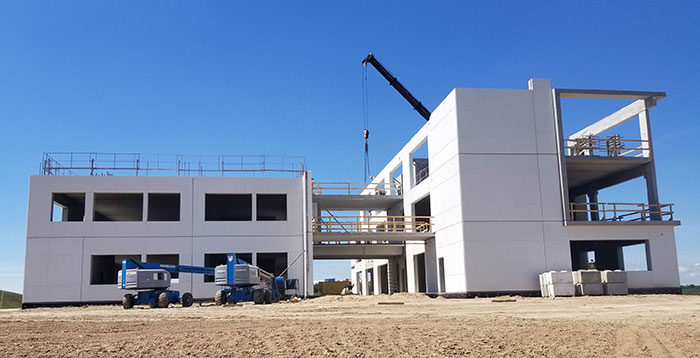 This can be harder in precast and tilt-up construction because you’re sandwiching our insulation between concrete and you have to think about if there is fire in the building and the spread of flames,” he continues. “Kooltherm has outstanding fire and smoke development properties, which reduces the risk of fatalities in a building if there is a fire and allows more time for occupants to exit. It also is very good for sustainability because it’s not made with harsh chemicals, so it can help owners achieve those higher-performing LEED credits.”

Kooltherm has been in the North American market since late 2016, and some of its early U.S. projects involved working with a precast company in Michigan on a meatpacking facility in Detroit, and a new data center in Pennsylvania. On all of its projects, it has been key that Kooltherm delivers a high R-value without a standard insulation product’s thickness.

“On one of our first Kooltherm K20 jobs, the job specified insulation with an R-value of 32,” Macro explains. “No other conventional insulation boards can get to that level of an R-value without really expanding on thickness. That data center needed a lot of temperature control, and four inches of standard insulation usually gives an R-value of 20 at most. With that, you’d have to do much thicker wall assemblies, and that is not practical for many buildings because all of the windows and doors would be expanded exponentially. One of those early projects needed an R-value of 32, so we provided Kooltherm K20 in 100 millimeter.”

In 2017, Kingspan introduced its Kooltherm K20 Concrete Sandwich Board for tilt-up and precast walls, providing contractors with higher-performance and smaller-dimension insulation materials. This product is available in standard sizes or can be ordered in custom lengths, and comes in R-values ranging from 13.5 to 40. It offers an R-value of 17 on two inches.

The product’s high R-value, environmental features and outstanding fire and smoke performance caught the attention of Ontario-based Stubbe’s Precast Commercial, which is a provider of structural and architectural precast concrete, readymix concrete and bulk cement. Stubbe’s was building its new headquarters, and the company wanted an R-value of 32 in four inches of thickness.

The new Stubbe’s headquarters is a total precast structure with three stories and a basement, according to Stubbe’s Project Manager Albert Meyer. Stubbe’s acted as its own engineer of record and precast engineer, and the project involved exterior insulated precast, precast interior walls, hollow-core, double-tee stairs and landings, and precast beams. The structure has two wings and a center atrium, as well as a glass-encased atrium boardroom. It was built for a 120-person capacity.

“We have multiple precast finishes on the interior with an integral white concrete exterior accented with various stained portions, as well as thin brick,” Meyer explains. “There are several stained concrete feature walls on the interior, a waterfall in the reception area, concrete countertops throughout the building and a polished-concrete boardroom table.”

Macro notes Kingspan Kooltherm K20 Concrete Sandwich Board is “very unique” in the market because of all of its benefits, and allows Kingspan to help precasters from developing extremely thick wall sections, which increases costs and puts limitations on a structure’s connectors. Other precasters have seen this, so now Kingspan has a number of significant projects underway with Kooltherm K20.

“Kooltherm K20 has a fiber-free core,” Macro adds. “Its fire performance is a huge feature of the product and was really important to Stubbe’s. Kooltherm K20 also has a closed-cell structure, so it keeps out moisture and water, is resistant to fungi and is very stable. All of this is very important to precasters because it doesn’t reduce the R-value over time. It has a low pollution potential and hits all the environmental hot points, which architectsreally like. R-value requirements in North America are increasing, especially as you go farther north, and that means thicker and thicker insulation boards, but Kooltherm can really reduce that thickness.”

Wilson notes Stubbe’s understood Kooltherm K20’s major heating and cooling benefits because of its location in Canada. “They really cared about the performance of that building because in Canada, you get the extremes of weather,” he says. “They needed to push the envelope to the maximum of what traditional panels could produce and get the highest-performing insulation value. Six inches of our Kingspan GreenGuard XPS Insulation product would give that same performance but it would take up a lot of space.

“High-performing insulation like Kooltherm K20 can help cut energy bills and makes for a very efficient building,” he continues. “It is well above the energy code, and for someone who owns a building, the payback will be great over the life of the building.”

Wilson adds that it was good to work with Stubbe’s on this project because of the relationship that was created. “We had used Kooltherm K20 Concrete Sandwich Board on other projects with them, but it was great when they decided to use it on their own headquarters. We really built this relationship from them learning about this product, and to have a precaster use it in their own headquarters makes for a great story.”