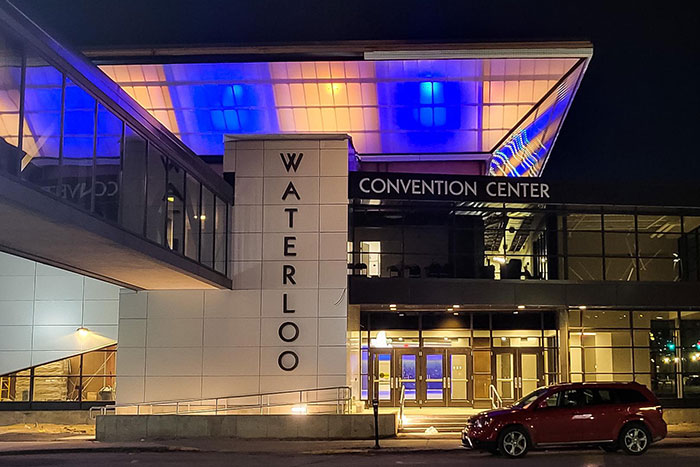 EXTECH recently completed a project in Iowa – one that sets the remodeled Waterloo Convention Center at Sullivan Brothers Plaza apart with a translucent beacon of light on the top of the building. Architect Nathan Compton of ISG Inc, EXTECH, C.R. Glass Company and Cardinal Construction worked together to bring the vision to life. At the top of the convention center, a large beacon of light and architectural point of interest clad in EXTECH’s LIGHTWALL 3440 system draws attention to the building.

Wrapping up just this late spring, the overall renovation plan was to transform and engage the community and to support the local economy through an enhanced visitor experience to the downtown corridor.

Compton designed an open corridor with raised ceilings, and featured bright finishes throughout, along with the use of the 12,000 sq. ft. LIGHTWALL system. The tongue and groove interconnecting polycarbonate wall system is the ideal backdrop for bringing light into the space during the day, and providing light diffusion for an even, backlit night display. 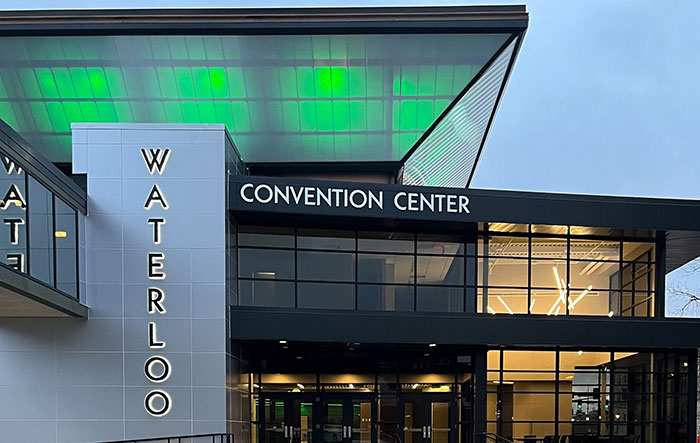 Compton, of ISG Inc., was awarded the project because the city felt their team understood the needs of this convention center. While describing the project, Compton added, “Our team of experts used visualization and 3D rendering technology to convey the space to its numerous stakeholders, giving them an in-depth view to the space and further assist in the design process.”

The convention center is located at 200 W 4th Street, Waterloo, IA. The remodel involved over 100,000 square feet and honors Five Sullivan Brothers Memorial. Highlights of the project include the brick exterior finish that was preserved and updated with modern materials, lighting, and natural elements to draw away from the former brutalist design. The plaza pays tribute to the Five Sullivan Brothers with bronze memorials throughout. Grass areas and greenery replaced what was before a concrete plaza to offer a comfortable gathering space for festivals, food trucks, and many other activities.