While Xypex Admixtures and Coatings are recognized throughout the world as reliable treatments for the waterproofing and protection of both new and existing concrete structures, the ability of Xypex Crystalline Technology to improve reinforced concrete’s resistance to the damaging and very costly effects of various chemicals (specifically, chloride salts) is not as well known. Chlorides are arguably the largest contributor to concrete deterioration and the degradation of infrastructures. The associated costs are likely measured in trillions of dollars worldwide and are increasing. Concrete structures susceptible to chloride attack include those in salt water marine environments (piers, seawalls), surface transport (bridges, parking garages), and foundations in brackish soils. 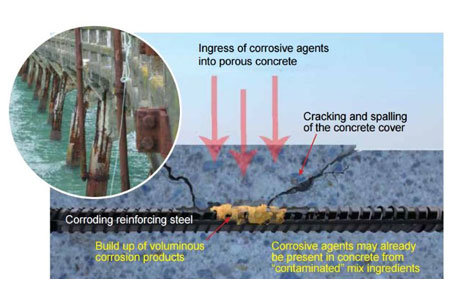 Chlorides that are dissolved in water, penetrate slowly through sound concrete but very rapidly through its cracks. These chlorides can quickly degrade reinforced concrete by accelerating the corrosion of the steel embedded in it. Iron oxide (rust) occupies a volume several times larger than the original steel and, as there is no room for volume change within the concrete substrate, the resulting stress will eventually create cracking. These cracks allow the chloride-laden-water to reach the steel even faster, accelerating the corrosion cycle and ultimately resulting in the need for costly repairs.

Xypex Crystalline Technology prevents the ingress of water by, in effect, shutting down the pores and micro-cracks in the cement matrix and by bridging small cracks within the concrete mass. Since testing has shown that Xypex-treated-concrete will prevent water from reaching reinforced steel even under extreme hydrostatic pressure, it follows that the chlorides dissolved in this water will also not reach the steel, thereby slowing or stopping the corrosion cycle. While other strategies are available for densifying concrete and for reducing the diffusion rate of chlorides, most are ineffective in dealing with cracks.

Xypex, in contrast, is one of the only strategies that will prevent the diffusion of chlorides in the sound concrete while also closing the leak paths caused by the micro and macro cracks that inevitably occur.

Significant independent research has been conducted to determine Xypex’s effectiveness in reducing chloride-based concrete degradation. The following table briefly summarizes the results from some of the research conducted on Xypex’s ability to prolong the service life of concrete in a chloride environment.