The RAC at Georgia Southern serves as the center of campus life, welcoming over 5,000 students each day. Originally opened in 1998 with 80,000 square feet, the facility was expanded in 2006 to its present size of 215,000 square feet. The expansion achieved LEED certification, the first building to do so at Georgia Southern, which reflected the university’s culture of sustainability. Among the many amenities at the RAC are an aquatics center with a 25 meter swimming pool, eight indoor basketball courts, group fitness studios, a rock climbing wall and an 18,000 square foot fitness center. 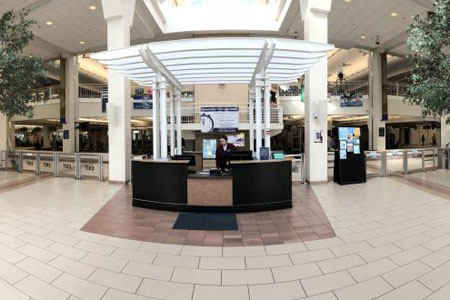 The newly renovated RAC deployed Boon Edam waist high turnstiles and gates as a means to control access for the increased number of visitors each day under staff supervision. In 2006, the turnstiles were paired with fingerprint scanning technology to confirm the identity of each member. But in 2014, when the Iris ID IrisAccess solution was paired with tripod turnstiles at two dining centers on campus, the RAC facility managers decided to investigate integrating an eye scanner with their current access control software.

“With each passing year, the size of the database would grow, leading to an increase in the time it would take to verify each member. The process slowed, taking five to 12 seconds to grant access, causing unwanted delays for our users,” said Jason Schmidt, facility coordinator at the RAC. “When students used the iris scanners in the dining halls, it took no more than 2 seconds to process their entry. Once we realized that Iris ID was the superior method for access control, we decided to upgrade our system to better meet the needs of our members.”

Currently, as members enter the RAC in the main lobby, they can choose from two different access points: they can scan their iris at the iCAM7000S Series mounted on the turnstile, or swipe their ID at the main desk and proceed through a gate. Boon Edam Trilock Side Gates are used on the other side of the main desk for dedicated egress.

“The arrangement of a turnstile paired with the iris scanner technology is extremely fast and we’re encouraging our members to use it,” said Schmidt. “Once they purchase a membership and are entered into our database, the system grants them access to the facility and it is pretty seamless.”

The RAC is planning to renovate in the near future to have a total of 4 turnstiles integrated with the Iris ID IrisAccess solution.
“The Iris ID and Boon Edam partnership goes back to early 2000 when the two technologies were integrated at Schipol airport in Amsterdam,” said Mohammed Murad, vice president for Iris ID. “We’re very excited to continue delivering integrated technology solutions to our customers.”

“We are always concerned with who is coming in and prefer to have as many turnstiles as possible to automate the process and reduce the burden on our staff. Everyone who is registered for the iris scanner likes it; we’re looking forward to the next stage when we can have multiple entrance lanes, bringing everything up to speed,” concludes Schmidt.