Inside the Redesign of Nassau Coliseum

In recent years, Nassau Coliseum had begun showing signs of age after hosting a steady lineup of concerts and sporting events in the four decades since its opening in 1972. Fans of a rival hockey team even took to calling it “the mausoleum.” After a proposed plan to demolish and replace the Coliseum wasn’t approved, the facility sought a redesign to inject new life; stylish, state-of-the-art upgrades; and local flavor into the venue, located in Uniondale, NY.

Gensler was responsible for the interior renovation of the Coliseum. According to project team member, Taso Sioukas, the firm wanted their update to make a new “design statement while maintaining the ‘good bones’ of the existing infrastructure.” This would allow the transformation to deliver first-class programming for guests and artists, while acknowledging the space’s rich history, which once saw Elvis Presley perform four sold-out shows in 1973.

A big design challenge Gensler faced was how to alleviate crowding without increasing the existing building’s footprint. Done right, the iconic Long Island venue would be able not only to host large events, but also to offer an appealing experience to a wide variety of people.

(On the one hand, those include sports fans while on the other, it includes people going to a huge range of other events, from business conferences to concerts by Jay Z. In fact, the star rapper himself attended early proposal meetings representing Nassau Events Center.)

“One of the main drivers was to de-clutter the concourse,” added Sioukas. “We achieved this by opening up the vomitories to act as a direct connection from concourse into the bowl.” The result is an instant, palpable connectivity to the action and excitement happening in the bowl.

Gensler wanted to reimagine the venue’s retail environments to create a more open and fresh atmosphere. “The deteriorating exterior storefronts were replaced with clear, high performance glass around the perimeter,” says Sioukas. Abundant natural daylight penetrates the curvy space with a softening glow, making sure visitors inside have “a greater connection with the outdoors and those outside have a greater connection to the activities happening inside.”

Gensler’s redesign sought to create a more open, fresh atmosphere and greater connection to the outdoors.

Working with contractor Hunt Construction Group, the design team at Gensler further ramped up the energy with special features like a beer garden and Artist Quarters backstage that offer souped-up, customizable suites for artists and their entourage to use.

After about four years of planning and construction, visitors to the roughly 400,000-sq.-ft. interior encounter an environment that is inviting, airy and modern. Overhead, a custom configuration of High Profile Series ceiling elements by Hunter Douglas Architectural – peaked metal beams with a decorated wood look finish –– lead the public through the curved concourse into the arena’s bowl.

The main concourse received a wood rafter suspended ceiling feature along with revamped bathrooms, lighting, and concessions. The solution pays homage to the arena’s history by preserving the interior architecture while overhauling its infrastructure and material finishes. 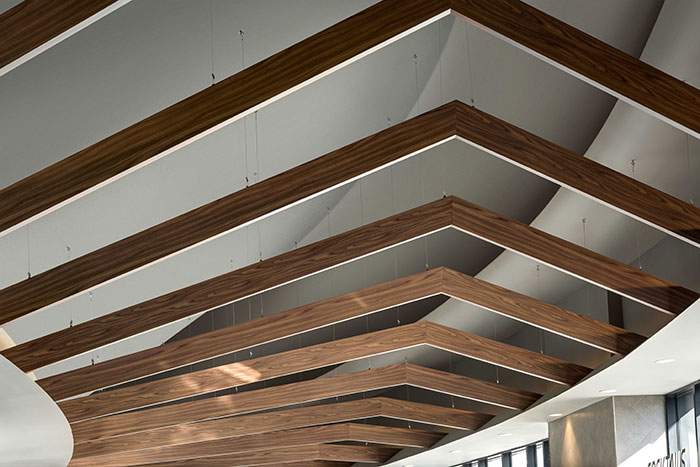 Hunter Douglas’ engineering team worked to design each beam’s length and angle, varying each to establish a visual “wave effect”.

“We were challenged with the overall complexity of the angles and lengths of beams to be able to achieve the look they wanted,” he says. The engineering team worked to carefully design each beam’s length and angle, varying each to establish a visual “wave effect” that allowed visitors to “see movement as they walk around the coliseum,” Pope adds.

The ceiling design and installation “was definitely unusual,” says subcontractor Richard Meyer, of Cord Construction. “Luckily, we have state-of-the-art layout programs that let us take the architect’s auto-CAD file and lay out all of the parts going around the building to ensure we kept the look they were looking for. Meyer says an engineer did pull tests to ensure it was “still going to be cost-effective and hold up in the long run.” 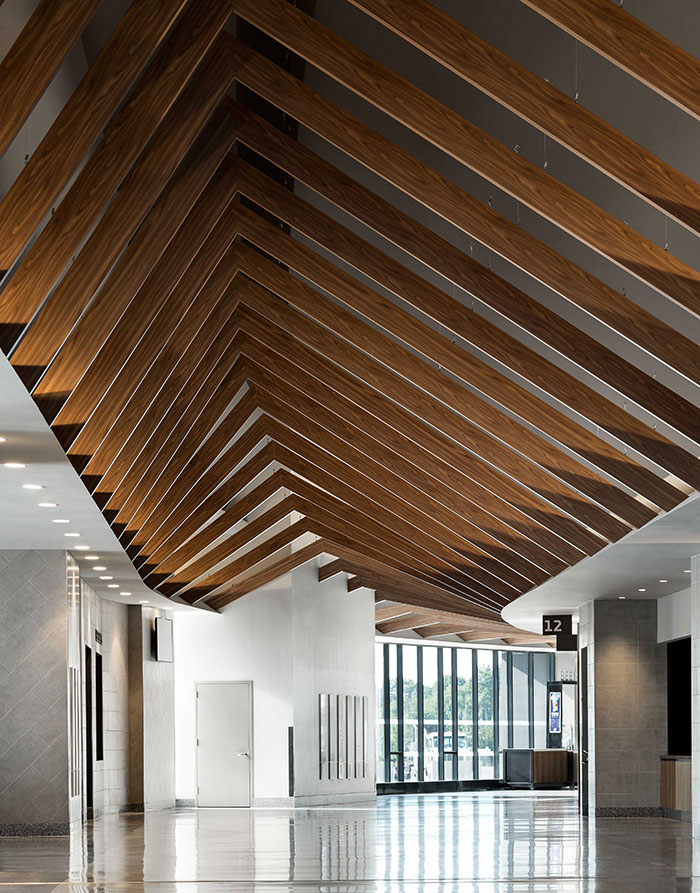 The ceiling elements offered “the full finish and look of wood” with the strength and ease of installation of metal, says Richard Meyer, of Cord Construction.

He adds that using the lightweight extruded aluminum beams of the High Profile Series Frameworks system offered “the full finish and look of wood,” along with the strength and ease of installation of metal, which “is easier …to work with,” says Meyer. “It’s a more durable product and definitely came out nice.”

He says the Hunter Douglas team excelled at providing drawings that offered “a nice guide to putting it all together. I don’t think anyone’s really done that type of system before… there was definitely a lot of designing involved in this custom work.” While “the installation went very fast,” according to Meyer, he detailed extensive planning “to figure out where the parts and pieces go”. 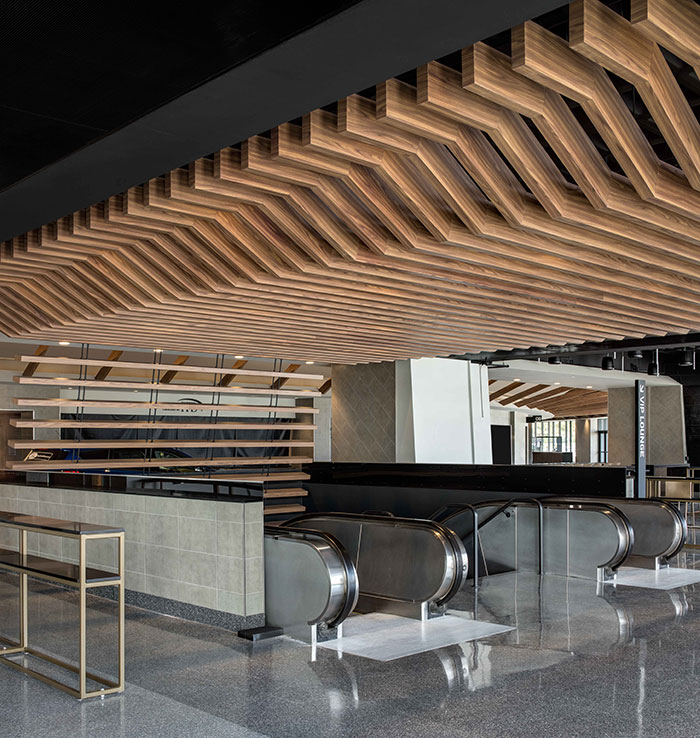 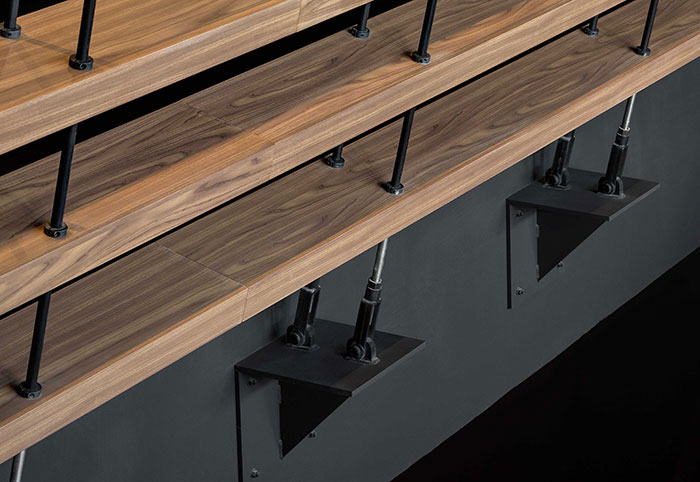 Also designed was a decorative shelf wall to fit above the escalators in a signature element of the space. This configuration required a different approach: “We had to design, test, and engineer all the calculations to make sure that the shelf beams were stable and would hold up,” Pope explains. “This is the very first time we have created a screen wall with extrusions. This was extremely challenging… [we] had to go through the process of engineering all components from structural plates to steel yokes to escutcheon washers.” A great collaborative relationship between Hunter Douglas Architectural and the team at Cord Construction eased this process.

“In alignment with the new programming platform, it was important to imbue the old structure with an entertainment-focused… experience for its guests and performers,” explains Sioukas. “As a result, we transformed this iconic facility into a shining, world-class sports and entertainment venue.”