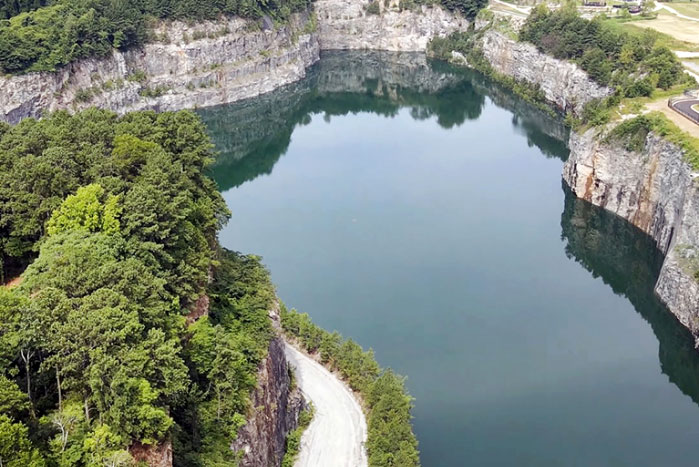 The City of Atlanta has long relied on the Chattahoochee River for the bulk of its raw drinking water. In 2006, with the purchase of the defunct Bellwood Quarry, the city began the ambitious Atlanta Water Program, designed to convert the 400-foot-deep granite quarry into a 2.4 billion gallon reservoir and extend the city’s drinking water reserve from just three days to more than 30 days.

The $368 million program got underway in earnest in 2016 with the launch from the floor of the quarry of a 400-foot-long tunnel boring machine (TBM) dubbed “Driller Mike” (fig 2). The TBM took two years to carve out a water supply tunnel 12.5 feet in diameter and five miles long connecting the quarry and the Chattahoochee and Hemphill water treatment plants (WTPs) with the Chattahoochee River (fig 3).

The quarry and the surrounding 280 acres—which has been a backdrop for productions such as Stranger Things, The Walking Dead and Hunger Games—will also be transformed into Atlanta’s largest park, to be known as Westside Park.

To fill the quarry and supply the two water treatment facilities, new pumping stations were built at the quarry (fig 4) and at the Hemphill WTP. At the quarry, the 253 million gallons per day (mgd) pumping station accesses the supply tunnel via two shafts, one 20 feet in diameter and 340 feet deep and the other 35 feet by 250 feet.

The Hemphill WTP features a new 180 mgd pumping station that’s used to keep the city’s two original reservoirs topped up to their full capacity of 525 million gallons. Until the creation of the 2.4 billion gallon Bellwood reservoir, Hemphill was Atlanta’s only major reservoir. The Hemphill pumping station accesses the new supply tunnel via five steel-lined shafts drilled 420 feet deep and 9.5 feet in diameter.

A critical feature at both new pumping stations are large multi-chambered concrete channels (figs 5&6) designed to combine and control the flow of raw river water from the pumps into each of the reservoirs. The concrete channels were cast on site by Precision Concrete Construction, Inc., based in Alpharetta, Georgia, USA.

Xypex Admix contains proprietary chemicals in powdered form that react with the moisture in fresh concrete and with the byproducts of cement hydration to generate a non-soluble crystalline formation in the pores and capillaries of concrete. Admix C-500 becomes an integral part of the concrete and will continue to waterproof and protect for the life of the structure.

Xypex Admix C-500 enables the concrete to resist both positive and negative hydraulic pressure, can heal hairline cracks up to 0.4 mm, and provides chemical resistance against the attack of acids, chlorides, sulfates, carbonation and other negative effects. Xypex admixture provides permanent protection that will not degrade like synthetic coatings and membranes.

All of the new structures at the quarry and Hemphill locations were built to last at least 100 years. According Precision Concrete project manager Harshal Patel, the concrete channel at Bellwood Quarry was tied into the pumping station via 10 large pipes, ranging from 24 to 36 inches in diameter (fig 9). The Hemphill channel was linked to the new pumping station via five 36-inch pipes.

“These pipes are connected at the bottom of the channels and concrete was poured around the pipe openings,” Patel notes. “Sealing the opening inside the pipes in order to conduct those tests was a challenge. We used two different types of waterstop and Xypex admixture at both locations. We had to confirm that Xypex would provide the waterproofing we required so we conducted hydrostatic tests.”

The Xypex southeast U.S. field team provided guidance to Precision Concrete and the construction managers at-risk (CMAR)—PC Construction and H.J. Russell & Company. “There was hairline cracking in the channel structures at both Hemphill and Bellwood Quarry,” says Jim Vaughan, a Xypex regional representative. “That’s very common and one reason Xypex Admix is added to concrete when waterproofing and protection is important.”

Especially with structures that hold drinking water—even raw water—it’s important to prevent the penetration of anything harmful. Xypex has been independently certified safe for potable water applications.”

Vaughan made multiple visits to both the Bellwood Quarry and Hemphill job sites to observe hydrostatic testing and evaluate the status of crack healing progress (fig 10). “We advise customers to allow time for Xypex (Admix C-500) to work,” Vaughan explains.

“While it’s not always possible, we suggest that customers allow several weeks for Xypex crystallization to seal cracks , before any other measures are considered (fig 11). Generally the cracks self-heal but if any don’t Xypex repair procedures can be used.”

Precision Concrete’s Patel notes that “Particularly in the case of the Hemphill channel structure, we upped the Xypex dosage from 2 percent to 3 percent to enhance the crystallization process. That really saved us labor time chasing leaks and saved on injection costs as well. We saw continual healing progress until all the cracks dried up on their own. Now that we have some experience with Xypex we are already recommending it on other projects, including a world-renowned golf course in Georgia.”