PENETRON crystalline technology has been the high performance solution in an almost endless range of infrastructure projects over the last ten years, including Russia’s FIFA World Cup 2018, the world’s most popular sports tournament. The latest project to be completed in May 2018 is the new 200-room Lotte Hotel in Samara.

Accelerating Construction Times
Ready in time for the World Cup kick-off next month, the 16-floor Lotte Hotel is within walking distance to the (also new) Samara Arena. The project specified PENETRON ADMIX for all below-grade concrete structures, including the two-level underground parking garage (11 m / 33-feet below ground). PENEBAR SW waterstop was used to seal the construction joints; tie-holes and framework seams were treated with PENETRON and PENECRETE MORTAR. 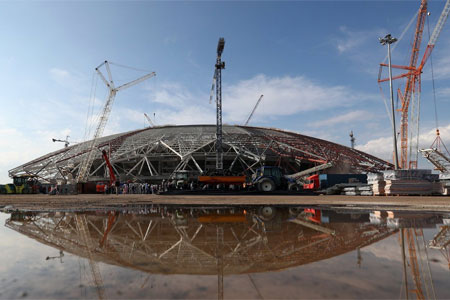 Looking good with PENETRON: The Samara Arena is one of the World Cup’s most striking venues. PENETRON and PENEBAR SW waterstop were used for both the stadium and the adjacent wastewater treatment.

Dmitriy Martyanov, Director of SPMU-Penetron Samara, noted that “using Penetron materials allowed the builder to significantly shorten construction time, which was extremely important since the project had begun a year later than initially planned.”

“Over the years, Penetron Russia has gained a comprehensive level of experience and know-how in countless public projects and infrastructure upgrades across the country,” says Igor Chernogolov, President of Penetron Russia. “This is a good thing, because this summer we’ll be working on a number of other infrastructure projects, right up to the first kick-off!” 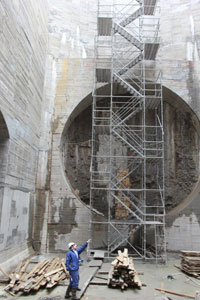 Ramping up Russia
The range of infrastructure projects that have benefitted from PENETRON crystalline technology includes everything from hotels and residential housing to bridges, water treatment plants, and underground parking garages and tunnels. A selection of the many Penetron projects completed during the ramp-up to Russia’s 2018 FIFA World Cup tournament include:


“As we showed at the FIFA World Cup 2014 in Brazil and the FIFA World Cup 2010 in South Africa, PENETRON’s crystalline technology transforms porous concrete into a highly durable material, even in the largest projects,” adds Robert Revera, CEO & President of The Penetron Group. “That’s why “durability by PENETRON” continues to enjoy success around the world, especially in the often harsh climates found in Russia.”