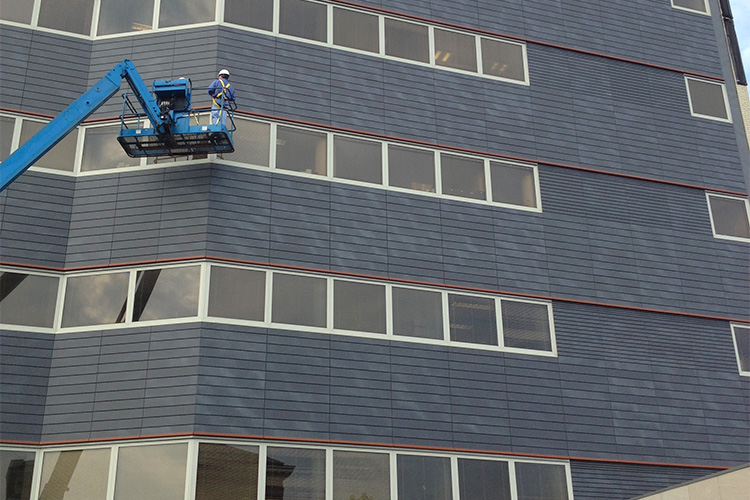 The Center for Industrial Innovation has deep engineering roots and is named after George M. Low, an RPI graduate and 1960's Director of Apollo Spacecraft where under his direction eight Apollo flights were successfully flown including lunar landings. Mr. Low would later be appointed Deputy Administrator of NASA and RPI's 14th President. The Low Center is one of the most dominant buildings on the campus.

The decision was made to go with the Argeton Terracotta Rainscreen System from Telling. The terracotta system is designed to last the life of the building. Components of the system/wall assembly included an uninterrupted air/ moisture barrier applied to the block, a continuous blanket of insulation, an aluminum subframing that created the open cavity for drainage and ventilation, and completed with kiln fired terracotta tiles. In a recladding operation such as this a primary consideration was weight. With the Argeton system weighing in at only eleven pounds per square foot it fit the engineering requirements exactly. Along with the longevity of the system, maintenance was an important factor. The Argeton system has a very low cost of ownership with no parts or components that will wear out, burn, harden or need to be replaced over time.

Rensselaer Polytechnic Institute, founded in 1824 is the first and longest running school of Science and Engineering in the United States. The Low Center for Industrial Innovation Building, constructed in 1984, is a massive nine-story concrete structure on the Rensselaer Campus. The existing brick veneer perimeter walls are comprised of 61% light colored bricks and 39% red bricks. In 1996, spalling of the light colored bricks was deemed a safety issue. Ryan-Biggs Associates, P.C., were commissioned then and again in 2005 to examine the brick veneer. Their examination of the building revealed the light colored bricks were highly absorbent and were prone to spalling, cracking, and continued expansion due to insufficient relief space at relieving angles, thermally induced movement, and water infiltration into cracks. Spalling due to freeze thaw action was progressing on all facades of light colored brick especially on the north face over the heavily traveled pedestrian path. Safety netting had to be installed.

The project team consisting of Owner (RPI), Architect (Architecture +) and Construction Manager (VMJR Companies) began analyzing replacement options in 2008. Supported by the engineering minds of the Institute and armed with an updated façade replacement case study the brick replacement project was underway. Beginning with their own building research dating back to 1996, options were narrowed down to metal panels, brick veneer and terracotta rainscreen. The look of traditional clay, architectural features, the visual mass of the building, performance of ventilated rainscreens, and need for zero maintenance led to the selection of a terracotta rainscreen.

In preparation for supplier selection, the Team spent the next two years researching, visiting projects, and reviewing mockups. The selection process included a lengthy qualification statements developed by the Institute and formal proposals from all of the major terracotta suppliers. Each was asked about their systems, tech support, experience, and pricing, including the construction of sizable mock ups. Upon interviewing the four finalist suppliers a 23 point evaluation was completed. The selection and evaluation looked not only at the company and its support team but also its manufacturing capabilities, experience, raw materials, schedule capabilities, and primarily the distinguishing features of the terracotta rainscreen system.

Once the Argeton system was selected the building team collaborated closely with Telling engineers to close in on the operation and installation sequence. Exiting bricks were removed and recycled. The exposed block was repaired or replaced and the surface was parged to receive the air/moisture barrier which serve as the ultimate weather wall. Anchor brackets were fixed to the block to hold the facade system. The air barrier was protected by a continuous blanket of noncombustible mineral wool insulation. The Argeton system used a series of hat channels and clips to hold the tiles in place. The result is a modern look and uniform expression of well- defined tiles that keep the look of the building and bring into play the colors of the local bluestone.

Arien S. Cartrette - AIA, Architecture +
Strong partnering between the Owner, Contractor, Telling (rain screen manufacturer) and the Architect was necessary on this ongoing project due to the complexities of the building and the multi phased schedule involving an occupied building. It is inspiring to have a technically proficient partner in Telling who understands and contributes to the design and engineering process while making the ordering, manufacturing, and delivery process flow smoothly.

Victor Macri - VMJR Companies, Construction Manager
“We wanted the best overall system, and Telling scored highest. The quality of tile, the precision engineered aluminum and the support of Argeton, a Wienerberger company put Telling ahead. We required a zero maintenance, high quality system, and Telling presented the most competitive price as well. The project is moving through its second phase and at this point the decision making process has paid dividends to the university. It looks great and has stayed within budget.”