See The Stunning Transformation Of An Abandoned Temple

After more than three decades of disrepair, a former Elks lodge in Tacoma, Washington, is reborn as a live music venue, hotel, brewery and five bars — all resplendent with color. 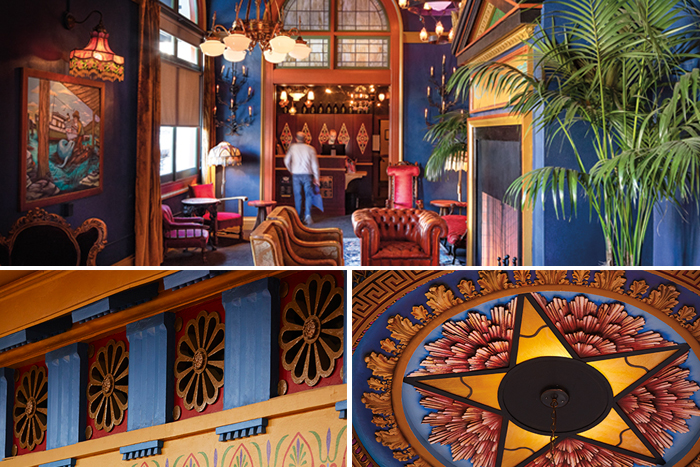 Last summer, Knife Knights — an innovative hip-hop duo repped by iconic Seattle record label Sub Pop — launched its 2019 North American tour at the McMenamins Elks Temple in Tacoma, Washington. It was one day after the newly renovated Elks Temple opened to the public, and the show was packed in the building’s 700-person-capacity Spanish Ballroom.

In many respects, though, the headliner that night was the Elks Temple itself. Originally built in 1916 by the Elks fraternal organization, it stood empty for more than 30 years in recent decades, and once-grand spaces, including the Spanish Ballroom, fell into decay and were covered floor to ceiling with graffiti. That’s when McMenamins — a chain of whimsical brewpubs, music venues and historic hotels with 55 locations in Washington and Oregon — stepped in, along with its architectural firm of 20 years, Ankrom Moisan, and architect George Signori.

“Because many of their buildings are historic and have often been neglected, they require a lot of structural attention,” Signori says. “And that’s part of the fun — how to creatively integrate that.”

Shoring up the structure happened alongside reimagining its square footage. “To feel good as a place to hang out and have a beer, you really need smaller spaces,” Signori says. The building’s vast, 28-foot-ceiling Temple Room, for example, was fitted with 20 hotel rooms (of the building’s total 45), many in the middle of the space so that the grand architectural walls and ceilings remain. The club’s former restaurant and athletic facilities were reworked to include a brewery and five bars. The Spanish Ballroom — complete with an elevated stage — was one of the only spaces that largely remained as is. “Everybody who has been through this building gets lost,” Signori says. “It’s a remarkable maze — almost like Venice, where a map is useless. Eventually, you’ll find your way out, but along the way, you’ll encounter some fun.”