Lightweight aluminium honeycomb panels faced with ultra-thin Stanton Moor sandstone fixed on a lightweight steel frame. That’s the solution used to satisfy planners’ and architects’ desire to use the local stone for the new 15,000m2, 156-bed Macdonald St Paul’s Hotel sandwiched between the modern Winter Garden and the Grade I listed late 19th century Town Hall in the centre of Sheffield. 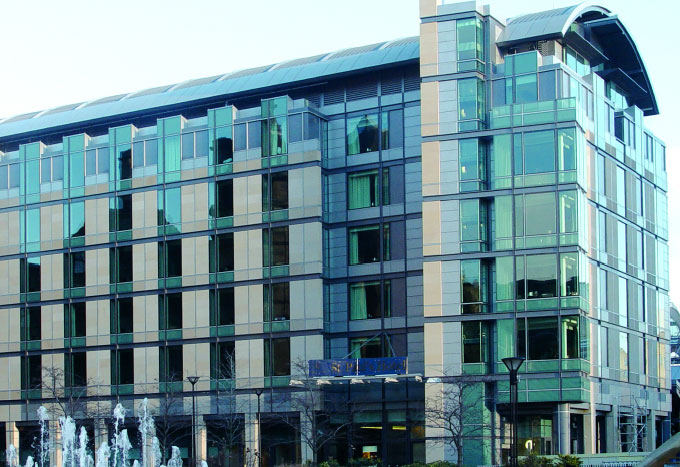 The stone, quarried in Derbyshire by Stancliffe, made its way across the M1 to Sheffield via Dallas, Texas, where it was sawn into thin section veneer on an aluminium honeycomb backing by Stone Panels, the company that makes the panels and who are represented in the UK by BrickWorks UK Ltd in Newark, Nottinghamshire.

The 70 tonnes of stone were shipped to Stone Panels in three containers as scants 2m x 2.2m at 70mm thick and came back as 1,300 lightweight panels. The majority of them were 932mm x 516mm x 26mm thick and fitted in just one container. The aluminium honeycomb backing makes up most of the thickness of the panels, with the stone at just 8mm.

That provided the external cladding for about 600m2 of the hotel’s walls, with cladding for the project’s 23 columns arriving later. The stone has been used in conjunction with frameless floor-to-ceiling height structural glass and metal features.