Set amongst the coastal beauty making up the campus of the University of California, San Diego, Otterson Hall is the home of the Rady School of Management. A short hang glide from the Pacific Ocean shores of Southern California, the building has been likened to a ship heading out to sea, which is an appropriate image considering the heritage of the university.

UCSD is an outgrowth of the famed Scripps Institution of Oceanography that began providing renowned marine science research in the early 1900s. It became one of the ten campuses of the University of California program in 1960, and now sprawls upon 1,200 acres with the ocean and a strong heritage as its backdrops.

Although the university has an enrollment of 27,500 students, it received, according to the UCSD News Center, more than 45,000 applications for admission for the 2007 fall semester, driven largely by the school’s worldwide reputation for research. Ironically, it was UCSD’s excellence in the sciences and technology that led to the formation of the Rady School of Management in the late 1990s. 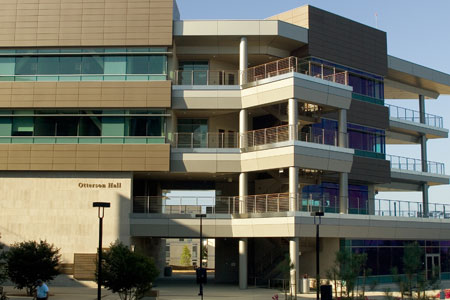 The contemporary design of Otterson Hall was anchored to the campus neighborhood by incorporating natural limestone cladding.

Southern California is noted for its cutting edge, technology driven companies, achieving a highly successful berth in the competitive world marketplace. While UCSD was providing brilliant technology educated students to the workplace, few had the business savvy to help lead companies in managerial and financial areas. In San Diego you had one of the most dynamic enterprise centers in the United States without a local university supplying future business leaders.

A solution to that roadblock became the cornerstone for establishing a school of management at the university.

Civic leaders raised more than $90 million in private funds to help build a world class faculty and facility, including major contributions from Ernest Rady and the Rady Family Foundation that donated $30 million.

In June 2007, on a courtyard gracing the almost complete new business school structure, the first fulltime class of the Rady School of Management graduated. A short time later the 50,000 square foot Otterson Hall was open for business.

Otterson Hall was designed by Ellerbe Becket of San Francisco. Bill Crockett, a principal with Ellerbe Becket, was the project’s lead designer.

Otterson Hall is a “contemporary and dynamic building; one that makes a statement,” said Crockett.

The Principal Architect and Senior Project Manager was Charles Kaminski who also served as UCSD’s official university representative for the building program.

“The campus is structured in what we call ‘neighborhoods,’ where color palates and the relationships with other buildings present a similar feel or texture to that area of campus,” said Kaminski. “Otterson Hall is located in a neighborhood of the campus where the selected stone, colors and texture were appropriate. The use of stone also helped anchor the building.”

“We wanted to use natural stone but we knew that conventional stone cladding would be outside our budget. However, the ease and overall cost of the Stone Panel product made the materials and construction affordable,“ Kaminski said. “We also used Stone Panel products in the lobby and elevator area because of its durability in a high traffic environment, its warm appearance and it allowed us to bring the outside to the inside.”

Cost is not only a serious issue with public universities, but in all construction where soaring expenditures are causing many architects and developers to look at alternatives to materials that are no longer affordable. StoneLite® panels are an example of an innovative new solution to an age-old problem.

More than 21,150 square feet of StoneLite® panels were installed on the exterior walls of Otterson Hall and along exterior elevator lobbies and landings.

“The lighter weight of StoneLite® put less load on the structure of Otterson Hall and thus helped us better deal with critical seismic issues,” said Crockett. Other attributes of StoneLite® panels are particularly seen as essential to construction in the West Coast seismic regions due to the product’s high flexibility.

“It took non-conventional ingenuity to develop a product like StoneLite® that has solved the challenges that solid dimensional stone cladding has presented for thousands of years. In this case, providing exterior stone cladding for the Otterson Hall building was particularly gratifying for us” said Stone Panels International LLC CEO Lance Utterback.

“It allowed Stone Panels International LLC to participate in the achievement of a beautiful, unique facility, graced with the intended character of limestone at an affordable cost. One that serves to exhibit the unique heritage of UCSD, and the ability to achieve design intent, strength and resistance to the distinctive environment of an ocean in the neighborhood.”