In September 2017, after ten years of planning and construction, the 350,000 sq. ft. Johnny Morris’ Wonders of Wildlife National Museum and Aquarium (fig 1) opened its doors to the public in Springfield, Missouri. The $300 million not-for-profit educational and conservation-themed attraction features something for everyone.

The facility includes 1.5 miles of ‘trails’ through two major sections: a Wildlife Museum, where visitors are immersed in 4D dioramas (includes natural odor, temperature and humidity), artifacts, and interactive displays depicting habitats from around the world, and an Aquarium featuring 1.5 million gallons of fresh and saltwater tanks showcasing 35,000 fish, amphibians, reptiles, birds, and mammals. 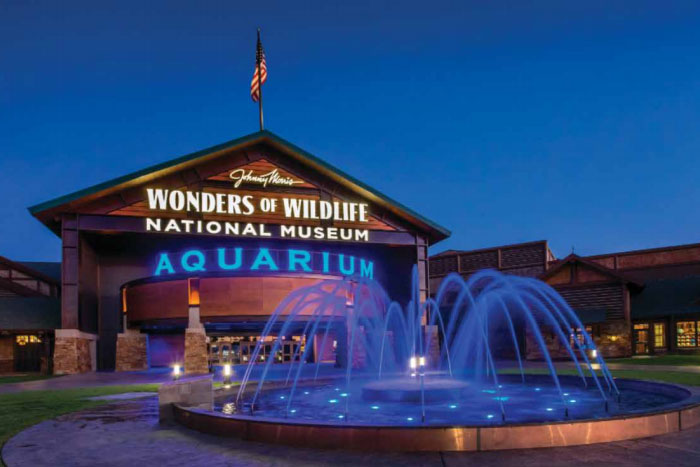 The Wonders of Wildlife (WOW) Aquarium, which was recently named the best aquarium in the United States by USA Today, is a world-class aquarium adventure, home to massive aquatic habitats teeming with life. Guests of all ages can immerse themselves inside a river full of piranhas, discover what it’s like to touch a stingray, traverse an underwater tunnel surrounded by giant river creatures and come face-to-face with sharks, jellyfish, snakes, iguanas, eagles, owls and more.

The experience begins with the breathtaking 60,000 sq. ft. Great Oceans Hall (fig 2), bringing the excitement of the ocean to the middle of America. After viewing historic boats fished in by Ernest Hemingway and Zane Grey, visitors step inside a 300,000-gallon Ring Tank (fig 3) and its open ocean habitat, teeming with life, including zebra sharks, leopard rays and sea turtles.

Next, a three-storey ‘Bait Ball’ tank (fig 4) features thousands of finger-size herring swimming in an endless, shimmering swirl with small blacktip sharks cruising the perimeter. Sharks suddenly plunges into the mass of herring, demonstrating both the survival behavior of the tiny fish and the feeding technique of the shark.

The final tank in the Great Oceans Hall is the Great Barrier Reef habitat (fig 5), a three-storey saltwater aquarium, teeming with colorful reef fish, including Maori wrasse, potato cod, and other species. The tank features an impressive 30-foot-high nine-inch-thick window that gives visitors an amazing glimpse of its namesake undersea environment, one of the seven wonders of the natural world.

All three of these stunning ocean habitats were built using advanced materials, including high strength concrete treated with Xypex Admix C-500 crystalline waterproofing, as well as huge custom formed acrylic panels for unimpeded viewing. Xypex was specified by Springfield, Missouri-based BRP Architects as a major component in a multi-level protection system, which the firm refers to in this passage from its website:

“The tanks’ designs proved to be quite a challenge. Since all contain saltwater, the project team explored options to achieve longevity in protecting interior surfaces within the corrosive environment, while also isolating these zones from public areas. The solution included epoxy coated reinforcing and waterproof additive for the concrete tank foundations, floors and walls; premium waterproofing applied to wet sides of each tank and a dedicated HVAC system. All surfaces exposed to the salt environment were protected with High-Performance coating system, including the door hardware.”

According to Chris Carson, senior project manager for Carson-Mitchell, Inc., a Springfield, Missouri, general contractor who played a key role in the construction of the Great Barrier Reef tank in the Great Oceans Hall, the height and volume of water in the huge tank—measuring more than 40 feet tall made Xypex an easy choice.

“We have used Xypex crystalline waterproofing on other projects and know that it works very well,” Carson notes. “For instance, we used it in the concrete we poured to create the trout pond near the grand entrance to the Bass Pro Shops Outdoor World headquarters store (connected to Wonders of Wildlife) in 2012. It was no surprise that it was specified for these huge aquariums.”

The Great Barrier Reef tank was cast in place by Carson-Mitchell in 2015, about two years before the grand opening of Wonders of Wildlife. “It was a challenging project for sure,” he explains. “The tank itself is oval-shaped with varying radii and it had two aeration tanks on either side of it, so it was a complex layout in terms of building the concrete forms and reinforcement.”

Carson notes that his teams assembled two cranes inside the Great Oceans Hall building to help in form construction and the placement of concrete. The Great Barrier Reef tank (fig 6) required more than 400 yd3 of high strength concrete to form the 18-inch thick steel-reinforced walls. More than 2,000 cubic yards of concrete, treated with Xypex Admix C-500, was used to build the three tanks in the Great Oceans Hall.

Diffusion or penetration of aggressive substances into concrete (such as saltwater chlorides) through interconnected capillary pores and cracks can lead to degradation and deterioration of the structure. Depending on the nature of the diffusive substances, they can attack concrete or its steel reinforcement.

The concrete tanks in the Great Ocean Hall are protected against the corrosive effects of saltwater through the use of epoxy coated steel reinforcement, a waterproof interior coating, and high quality concrete treated with Xypex Admix C-500 crystalline waterproofing.

Xypex Admix C-500 was added to the ready-mix concrete used in the aquariums at the time of batching. Xypex C-500 consists of various active, proprietary chemicals which react with the moisture in fresh concrete and with the byproducts of cement hydration to cause a catalytic reaction that generates a non-soluble crystalline formation throughout the natural pores and capillary tracts of the concrete permanently sealing the concrete against the penetration of water and other liquids from any direction.

Testing has shown that Xypex-treated concrete will prevent water from reaching reinforced steel even under extreme hydrostatic pressure. In this way, chlorides dissolved in water will also not reach the steel, thereby slowing or stopping the corrosion cycle. Xypex prevents the diffusion of chlorides into concrete by permanently closing the leak paths caused by the micro and macro cracks that inevitably occur.

Cracks in concrete cannot be completely prevented. Even with extensive reinforcing steel, proper mix design, and expert placement, micro cracks and even some visible cracks will form as concrete hydration occurs and concrete cures. Xypex crystalline waterproofing admixture and surface treatments can seal hairline cracks in concrete up to 0.4 mm in width. The Xypex treatment, unlike most other systems, becomes a permanent part of the concrete matrix and will continue to seal pores and cracks for the life of the concrete. Its unique dendritic crystalline growth will not deteriorate under normal conditions, and the crystalline process will reactivate whenever water is present.

According to Chris Carson of Carson-Mitchell, “Xypex does the job it’s supposed to do. A sizeable crack did develop in one of the aeration tanks and was leaking when that tank was filled. However, Xypex reacted and healed the crack over time, just as it’s designed to do. And, it will continue to heal any cracks that may form for the life of the aquariums. For this project and other projects where we have used it, Xypex waterproofing works really well for us.”