The site for the new Studio City Macau project presented a special challenge because of its location on the reclaimed land of the Cotai Strip next to the South China Sea. Waterproofing of the foundations was a particular concern for the architect, builder and owners because to the potential for corrosion due of the chloride content of the high water table. After careful consideration, it was determined that the originally specified membranes should be replaced with Xypex Admix because of its proven track record for protection against chloride diffusion and resistance to hydrostatic pressure. 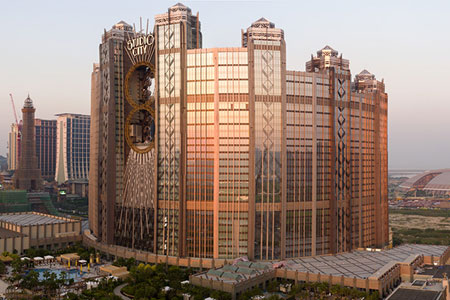 Xypex Admix was used in over 46,000 m3 of concrete for the basement slab and foundation walls . Xypex Concentrate was also applied to more than 89,000 m2 including the Flying Theatre and Hanging Garden. By replacing the originally specified membranes, Xypex Admix helped to significantly reduce construction costs and accelerate the construction schedule. The size and scope of this project required that three ready mix producers be employed for the supply of the concrete.

The lead designer for this $3.2 billion project was the Goddard Group, a world leader in the design, master planning, development and production of major integrated resorts and destination theme parks worldwide. The property is owned by Studio City International Holdings Limited, a subsidiary of Melco Crown Entertainment Limited which is led by Mr. Lawrence Ho.

The resort has three distinct shopping galleries, two with Hollywood themes, the third is based on New York's Times Square. Set into the casino’s façade is the world’s highest figure-8 ferris wheel ‘The Golden Reel’ which rises 130 meters above the entrance.

This is the fourth casino project in Macau where Xypex has been extensively used. The others are the Sands Macau (2004), Wynn Macau (2006) and Venetian (2007). Apart from casino projects, Xypex has also been used on a variety of other buildings in Macau such as the Prague Hotel, Macau Tower and the Quingzhou Square Public Housing project.