The BILCO Company has introduced a new automatic smoke vent that provides the highest level of protection against exterior noise intrusion on the market. 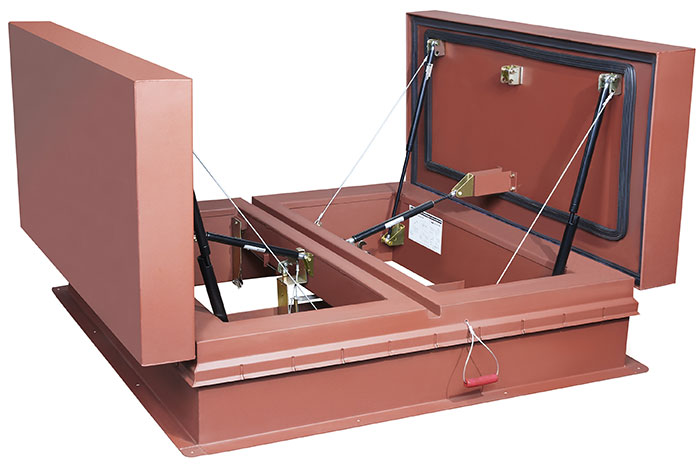 The new Type ACDSV Smoke Vent is specifically designed to provide fire and smoke protection for applications where exterior noise intrusion is undesirable, such as in auditoriums, concert halls, and theaters. According to Michael Toohey, General Manager for The BILCO Company, “Our new Model ACDV features a number of upgrades and improvements over the Model ACDSH it replaces, yet still offers similar pricing and installation ease.”
The new ACDSV carries an OITC-46 sound rating to guard against low-frequency outdoor sounds such as traffic and airplane noises and an STC 50 sound rating. In addition, the product has also received an ISO-140-18 sound rating when tested against rainfall sound. The figures are a significant improvement over BILCO’S previous model and are the top ratings among similar products on the market.

“We’re especially pleased with the OITC rating the ACDSV earned,” continued Toohey. “While any noise can be disruptive to a concert-goer, lower-frequency sounds such as outdoor traffic, construction and airplane noises travel further and fall within the range where human hearing is most sensitive.”

“The OITC is the preferred rating when addressing sound insulation from exterior noise,’’ said Harold L. Merck, a principal and acoustician for Merck & Hill Consultants of Atlanta, Ga. “While STC ratings may be fine for typical interior noise sources like voices, it does not adequately address the extended low-frequency noise contribution of aircraft, traffic, or even large roof-top equipment. This is similar to what we find with exterior windows in noisy environments -- while a window with a relatively high STC rating might seem like it provides adequate exterior sound insulation, we frequently find that the ultimate interior noise impact is not significantly reduced due to low-frequency sound infiltration. Ratings that include the OITC are more useful to assess how well a window (or smoke vent) will isolate environmental noise.”

This new design features mineral wool insulation and high-density sound mat material within the unit’s covers and curb to better inhibit sound transmission. Structural improvements include the use of heavier gauge steel for the curb and cover liner, a new cover gasketing system, gas-spring lift assistance and a center-mounted gas traction spring to ensure reliable and controlled smoke vent operation.
The new ACDSV is currently available in a number of standard sizes to meet the ventilation requirements of virtually any application. Custom sizes are also available when specified.