A high flow of visitors and a manual access control process led Universidad EAFIT (Escuela de Administración, Finanzas y Tecnología), a private institution located in the Colombian city of Medellin, to decide to upgrade its access system. To do so, the university installed 22 Boon Edam Trilock 75 turnstiles. Ten years have passed since then and the technology is still delivering excellent, trouble-free results.

Besides reducing delays on entrance and egress by authorized personnel and having total control over all people visiting the campus (who entered, which entrance, and at what time entered and exited), Boon Edam’s turnstiles for 10 years made possible the protection of one of EAFIT’s most valuable assets: its reputation as a safe institution, which has resulted in many parents choosing this school for their children. 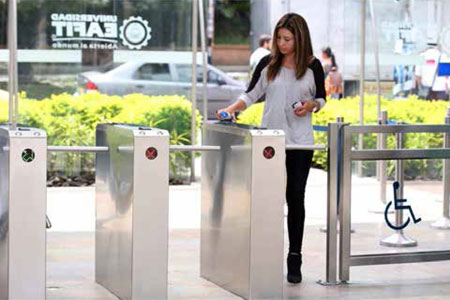 “Boon Edam’s turnstiles have demonstrated high quality since their installation. Their operation can be defined as stable, durable and compact,” said Sánchez, who also said that the after-sale service was excellent in terms of US-based Boon Edam personnel directly attending to claims to analyze any situation. This has been a key factor that has contributed to the optimum operation of the equipment and overall system.

Another aspect to highlight is the durability of the parts used to build the turnstiles. Specifically on that, Sánchez said that it is very rare that a part suffers any damage. “During the three years that I’ve been working at EAFIT, only three parts total from all 22 turnstiles installed in the university have had to be replaced. This is excellent considering that when I joined the organization the equipment had been in use already for five years.”

“Even though the turnstiles contain parts made from plastic and rubber, those parts are manufactured to such a high quality that the Boon Edam entrances easily withstand the heavy use they receive every day,” continued Sánchez. Currently, the turnstiles handle roughly 19,000 individuals a day entering or exiting the campus through its many different access points.

To ensure the proper operation of the turnstiles, EAFIT schedules four preventive maintenance services during the year. If a turnstile should fail, which is quite rare, the remaining turnstiles at the entrance continue to control access for pedestrian traffic in both directions.

In addition, the turnstiles make it possible to quantify the number of people that access the campus. With this information available at a glance, EAFIT officials can establish what entrances are used more or less during different times of day. Such data is highly useful when signing agreements with other entities and to quantify how many people entered the campus during special events.