Boon Edam Inc., a global leader in security entrances and architectural revolving doors, today announced that its Turnlock 100 full height turnstile will be a featured technology in an upcoming episode of “Machines: How They Work” on the Discovery Science Channel. 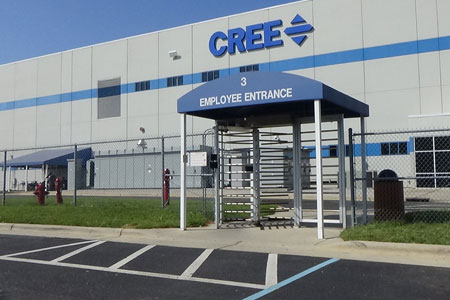 Boon Edam turnstiles installed at Cree Research in Research Triangle Park (NC) were filmed to illustrate how turnstiles operate in a real-world environment.

Each 30-minute episode of “Machines: How They Work” specializes in revealing the fascinating hidden workings of our everyday world using incredible photo-realistic CGI to explode everyday objects into their component parts. The show also films in live action at real locations to show how objects are manufactured and operate in their installed environment.

The episode featuring the Boon Edam Turnlock full height turnstile will air in the United States at 10pm on Thursday, April 28th. That episode seeks to reveal the answers to the following questions about three featured products:
The turnstile segment was filmed in North Carolina at Boon Edam’s Lillington manufacturing plant to show how the components of a turnstile are built and assembled. Turnstiles installed at Cree Research in Research Triangle Park (NC) were filmed to illustrate how turnstiles operate in a real-world environment, and stop intruders from entering a secure area.

“What an honor to be selected by Discovery Channel to be featured on this program,” said Mark Borto, Boon Edam CEO. “For many, a turnstile is nothing special, but the way this program explains the manufacture and use of the humble turnstile demonstrates there is a lot more going on than meets the eye.”