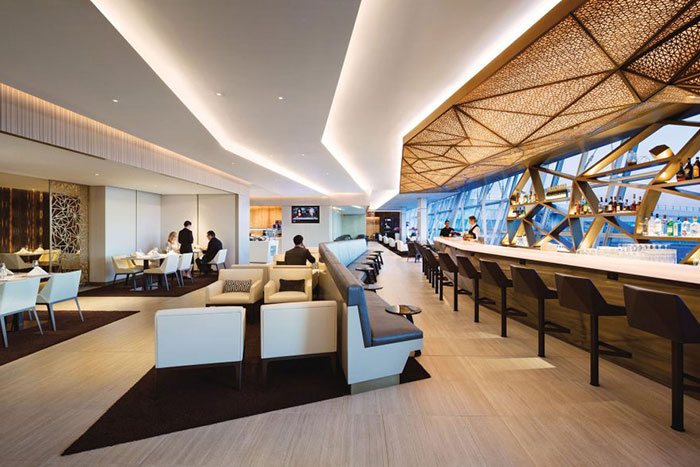 The design vision Gensler had in mind for the ceiling above the bar at the new Etihad Airways Lounge at JFK International Airport called for a modern interpretation of an antique Persian lantern with a warm glow emanating from within.

Etihad Airways, national airline for the United Arab Emirates, wanted the ceiling to reflect the design of its new brand image, which draws on the geometric shapes found throughout the architecture of Abu Dhabi and its desert landscape.

The concept Gensler developed for the ceiling featured triangularshaped metal ceiling panels installed in a faceted geometric pattern. The triangular-shaped perforations with translucent infill panels filter the light from behind the ceiling for a lantern-like glow.

Gensler needed to find a ceiling manufacturer who could help them bring this unique concept to life.

They turned to the You Inspire™ Solutions Center at Armstrong Ceiling Solutions to realize their vision. After reviewing the drawings, the design professionals realized that the Armstrong® MetalWorks Torsion Spring Ceiling System could be customized to create the design required for the 600-square-foot ceiling. “This was a complex geometric design,” says design engineer Dan Holdridge who worked with Gensler on the project. “There were approximately 160 ceiling panels with different sizes and shapes and each pod had its own suspension system.”

The lantern visual was created by cutting triangular-shaped perforations into the aluminum panels, powder-coating them with a bronze finish, and backing them with custom Infusions® infill panels. Lighting from behind the ceiling provided the desired warm glow.

The ceiling panels were manufactured in pods of three-to-six panels each and delivered with the suspension systems attached to facilitate installation.

“The lantern ceiling has become the jewel – the showcase piece within the lounge – that ties together the different elements manifested in the Etihad brand,” says Gensler design team manager Matt Johnson. “Etihad was absolutely ecstatic about the product and plans to replicate the ceiling design in other destinations around the world.”