Preserving its heritage, the complex gets its name because it sits on the site of the former Dooley’s Icehouse, a favorite local bar and restaurant which served the surrounding neighborhood and sports leagues playing at Hetzell’s Ball Field across the street.

Bucking the downturn in the real estate market, the Icehouse has attracted tremendous interest since it opened in March 2010 because of its proximity to Philadelphia’s historic sites and central business district. Its location near popular (and affluent) residential neighborhoods, as well as the Delaware River waterfront, contributes to the attractiveness of the development. In addition to its location, the fact that the Icehouse was developed by the EnVision Group and built as a ‘green project’ makes the property highly sought after. 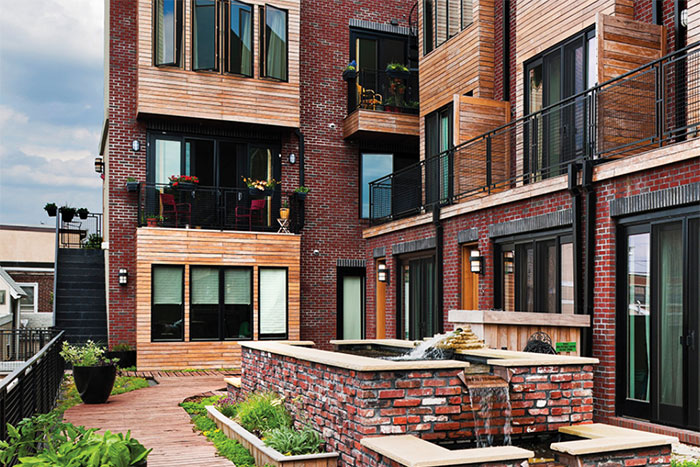 “From the beginning, it was the developer’s intention to build something that was energy efficient and that would minimize the impact on the environment,” said Judy Robinson, AIA, Continuum Architecture and Design, who designed the project. “That’s a philosophy we both shared.”

James Maransky, president of EnVision Group, said his organization recently received the LEED for Homes Platinum certification from the U.S. Green Building Council – the highest designation in energy and environmental design and building practices. In fact, the project is the first LEED for Homes Platinum Certified Multi-Family Low-Rise Complex in Philadelphia history.

The Icehouse’s green attributes speak for themselves. Among them, the Icehouse incorporates the following:

Recycled bricks and wooden beams removed from the old structure and repurposed in common areas, such as a stairway and rooftop pond;
A ‘green roof’ rainwater recycling system;

Of particular interest is the HVAC system that features the low air-leakage of pre-insulated ductwork fabricated from The Kingspan KoolDuct System. This makes it an attractive alternative for a green project like the Icehouse, where it keeps the air–leakage rate between one and five percent throughout nearly 10,000 sq.ft of the complex.

“When the KoolDuct product was recommended by (general contractor) Freedom Enterprises, I was very impressed,” said Maransky. “Having a fabricated duct system with minimal seams helped to ensure that air was flowing into the living space without escaping, making the space much more comfortable and energy efficient. It performed very well during the pressurized testing that was an integral part of the LEED certification process.”

The results from the full system air-leakage testing confirmed that the leakage rate is less than 40 CFM for each condo, which is significantly less than typical sheet metal ductwork. KoolDuct easily meets the Class 3 leakage requirements of SMACNA and is projected to save about 25 to 30 percent in HVAC electrical consumption.

Reduced air-leakage also helps air traveling through a ductwork system stay cool when moving through a hot attic, lowering demand on HVAC equipment and reducing energy costs for homeowners. In fact, industry studies show that reduced air leakage through ductwork can lead to:


Fabricated from rigid thermoset non-fibrous phenolic insulation panels, Kingspan KoolDuct offers many advantages over fiber glass ductboard and traditional sheet metal ductwork insulated with fiber glass duct wrap. According to Sterling Minter, vice president of PTM Manufacturing, the system supplier that first introduced KoolDuct to the project’s specifying engineers, Wachter Associates, “Not only does the pre-insulated system contribute to operational energy efficiency by reducing air-leakage, the KoolDuct panel used on the Icehouse project is the most thermally efficient insulation product commonly used in applications of its kind, delivering a more consistent R value (R-6.0 at 7/8” and R-8.1 at 1 3/16”) than typical fiberglass.”

It’s not just Icehouse homeowners who will profit from this system; it also provides the ductwork contractor with just as many advantages – both practical and financial. Ryan Rex, owner of HVAC contracting firm R.P. Rex Heating & Cooling, said, “The fact that it is so easy to work with was really important on the Icehouse because some pre-fabricated wooden joists did not have duct shafts lined up. We had to make many offsets and transitions to get the ductwork to the air device locations. Also, many areas did not have sufficient space to manually wrap a duct with fiberglass insulation.”

In other areas of the complex, the KoolDuct System ductwork was delivered in sections up to 13 ft long, requiring less handling and fewer supports, and saving installation time – all benefits for the contractor.

Maransky stated that work is continuing on the Icehouse’s second of three phases and that the project’s focus on energy efficiency and LEED certification is an important point of discussion with prospective buyers.

Robinson added that the green philosophy has attracted the interest of younger homebuyers, who tend to be more ‘eco-conscious’ than traditional buyers. “The first phase of 13 units sold quickly to buyers who are concerned about energy efficiency and the environment,” he said.

The Icehouse project clearly demonstrates that if you are going to insulate ductwork in order to save energy, it surely makes sense to get the most out of those savings by using the most thermally efficient and air-tight solutions available – without trading off on cost. Across America, specifiers, contractors and building owners alike need to ask themselves whether they can really afford the luxury of ignoring the clear advantages that pre-insulated ductwork has to offer, and the triple benefits it brings of cutting energy use, carbon dioxide (CO2) emissions and costs.