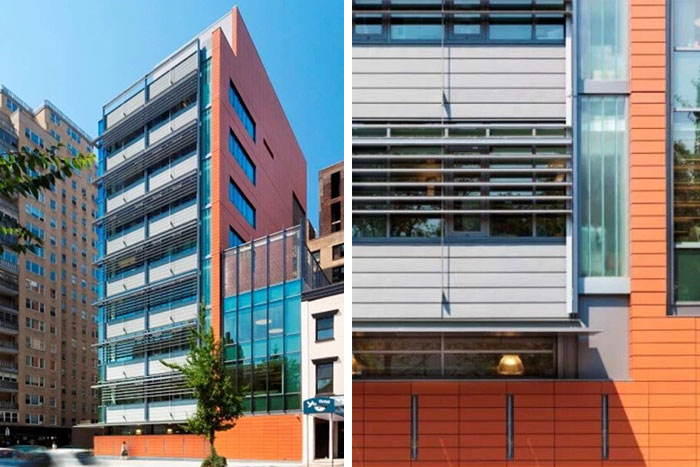 The Learning Spring School is not your average New York City independent education institution. Established by a group of concerned parents in the fall of 2001, LSS was conceived, built and staffed for children with high-functioning autism spectrum disorders. Not long after opening up in a commercial building on 29th Street, the school realized that its facilities were inadequate to meet the very specialized needs of its student body. Adding to the challenge, as early intervention for children in the autism spectrum became more and more prevalent, admissions applications began pouring in, and enrollment quickly exceeded the space's capacity. To address both of these short-comings, LSS commissioned New York Architectural firm Platt Byard Dovell White to design a dedicated building that would meet the school's growth projections and create an environment conducive to educating children with autism. Their success at creating this environment was in no small part owing to a custom curtain wall design - a sheltering system of terracotta rainscreen, glass, zinc, and aluminum sunshade system that lets filtered daylight in while keeping autistic students calm and focused on the lessons at hand.

While rainscreen façades are becoming more and more common in higher education facilities the use of the high performance terracotta rainscreens in K-12 is just beginning to take hold. Along with the increased thermal efficiencies and energy savings the terracotta gives a warm, natural, and welcoming appearance to the school. "The building façade allows nice light in, but you feel there's an internal focus to rooms, "says Mueller. "It's not about views, it's about mitigating light, eliminating glare, and making an environment that's comfortable so students can focus internally."

Nowhere was this rationale of combining the unique challenges more conspicuous than in the design of the cladding enclosure system. PBDW began designing the façade as a window wall system with framed spandrel panels, thinking that it would be less expensive to construct than curtain wall. However, exterior enclosure contractor Jordan Installation Services recommended to the firm that, in fact, an integrated curtain wall and rainscreen system would be a better option during the construction and for the lifetime of the building. "We all felt that utilizing a curtain wall assembly would ensure a more reliable wall in the long run" says Mueller. "When you transition between different wall assemblies, it creates more opportunities for leaks and defects. Building the wall as essentially one type of assembly lessened this risk and still enabled us to create the expression we wanted." This solution lent itself to improved construction, better coordination, and more control over the finished product as the sequencing involved only one primary trade. In the end, while the curtain wall was more expensive, the client and the design team felt that the upfront expense would minimize maintenance costs in the future, providing a long-term return on investment.

Terracotta Rainscreen Facade System Case Study in Durham, NCTerracotta Rainscreen Facade System Case Study in Durham, NC
The architects developed a scheme using terracotta and zinc spandrel panels, operable windows, and aluminum louver solar shades, all designed to make the interiors feel both well-lit and sheltered. The terracotta system is fixed to horizontally mounted Z channels which hold the continuous insulation over a monolithic air and moisture barrier. It is this combination of products and assembly that contribute most to the high thermal performance of the wall. Vertical hat channels of extruded aluminum are installed to the Z channels. Each terracotta tile is fitted into clips on the vertical channels creating a rainscreen façade designed to provide maximum thermal performance and moisture management for decades to come.

The primary wall assembly is accented by a bold terracotta rainscreen at the building's corners, as well as a low-e coated insulated glass corner and bookends. The overall facade including sunshades helps to cut solar gain significantly. The building's other environmentally friendly features, such as operable windows for natural ventilation, low-flow fixtures for water savings, and high efficiency equipment for energy savings, the façade has put the project on track to receive a Gold LEED for Schools rating - and a gold star from the instructors.

The Completed Project and Facade Systems

Learning Spring School contains academic, athletic and special needs spaces arranged as an eight story vertical campus for children with autism. A gymnasium, library and lunchroom are located on the bottom two floors. Classrooms are paired, sharing resource areas, study rooms and toilets. An aluminum and stainless steel sunscreen supported by an external steel armature drapes the facade's aluminum, glass and zinc curtain wall. A terracotta rain screen flanks the adjacent buildings and extends along the base.