Eight years ago AMBICO Limited was approached by the owner of the stunning art deco Canadian federal government structure known as the Victory Building to design and manufacture retrofit doors at the entrance and lobby. The building, well-known in Winnipeg, Manitoba, was built in the 1930s in the midst of the Great Depression and has been situated in the downtown core of that provincial capital for 80 years. Its striking edifice was surely meant to inspire and support the local prairie community that was suffering economically at that time.

Heritage architects of the Public Works Department of the Canadian government worked with AMBICO engineers to replicate doors that would complement the original design intent of the building’s design team. Michael Plett, AHC, of Penner Doors and Hardware was on site and coordinated communications between all parties involved in the door and frames retrofit project.

Winnipeg architect George William Norwood designed the building in the early 1930s in the modified art deco architectural style that was popular at that time. At a later date, the Canadian Federal Heritage Buildings Review Office classified the building as a heritage property because of its historical, architectural and environmental significance. In 2005 it was named “Victory Building” in honor of those who served their country in times of conflict and peacekeeping. 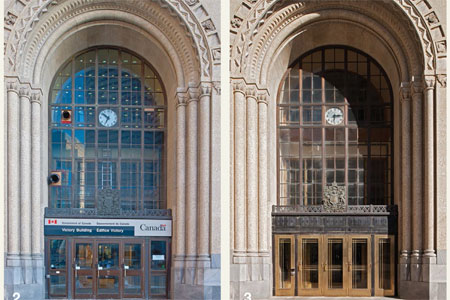 ”Before and After” view of the entire front façade, with doors replaced and bronze area above the doors cleaned and polished.

Those involved in the retrofit project recognized that a high level of expertise, guidance and technical knowledge would be required with respect to the restoration of several doors and frames. The project called for the retrofitting of those openings found at the impressive main entrance to the building. A number of interior openings on the ground level were also in need of refurbishment, and it was determined that they would receive the recognition and attention they deserved.

The phase of the retrofit that called for the fabrication and installation of the doors and frames began in the summer of 2013 and was completed in the spring of 2014. This is not to say that this portion of the project was completed in a matter of months—the finished door and frame products were the culmination of years of collaboration involving the Government of Canada (building owner), the project architect, project managers, AMBICO’s representative in Manitoba, AMBICO’s distributor, suppliers of ornamental hardware, and the sales, design, engineering and manufacturing teams of AMBICO Limited. Knowing that this project had the capacity to be unique, AMBICO Marketing Manager Pat Parker decided to engage a well-known local photographer to create a visual record of the project.

To maintain the integrity of the heritage designation of this building and to restore the selected openings to their original stunning appearance, doors and frames were clad in bronze in accordance with the original design criteria, and one interior clad door was etched to accommodate current UL10c fire standards, as well as to complement the design intent of the jewel-like lobby. Architectural hardware in solid bronze was designed to accommodate modern egress requirements while not compromising the art deco style favored by the original building architect.

Projects such as this are unique in many respects, and AMBICO’s approach was a company-wide commitment to the painstaking details that enabled the final products to meet the demands of all parties involved.

From the outset of the project, experienced members of AMBICO’s sales and manufacturing staff travelled to the site to coordinate with those involved in the design and installation of the door and frame assemblies. A close relationship with Penner Door and Hardware’s Mike Plett, AHC, in Winnipeg assured Ottawa-based AMBICO (which is 1,500 miles from the project) that they were well represented on site at all times.

AMBICO’s team visited the project prior to the commencement of work to assess the condition of the site, and they also made a final visit as the project neared completion to fine-tune the installation. Project Manager Stuart Brodie was a key part of the team, coordinating myriad details with the project architect, the local distributor and the general contractor, as well as with AMBICO’s suppliers and its own factory personnel. AMBICO’s lead hand, Rui Gomes, attended the site throughout the final phase, making certain that the finished product reflected the fine details that made this project one for the ages.