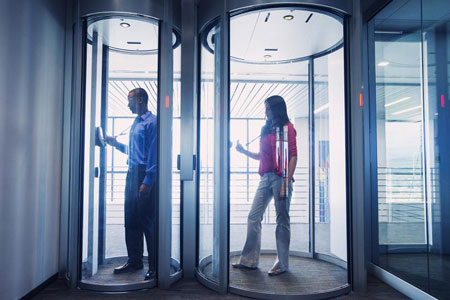 The Inherent Risk of Swinging Doors
Boon Edam designed the Circlelock Combi as a convenient retrofit option to address the risk that exists with any type of swinging door - once a swinging door is opened by an authorized user, any number of people may also gain access to a secure area, which is known as “tailgating” or “piggybacking.”

Preventing Intrusion while Maintaining Integrity
Many facilities use fire-rated swing doors to protect data and assets from destruction by fire, but this type of door cannot prevent tailgating or piggybacking. The Circlelock Combi attaches to an existing fire-rated door, converting it immediately into a mantrap solution that prevents piggybacking 24/7 and eliminates the need for manned supervision, all while maintaining the fire-rated benefits of the swing door. The Combi also saves considerable space compared to traditionally built mantrap vestibules that use standard walls and two swinging doors.

The Circlelock Combi is a cylindrical solution that has a single sliding door on one end and an opening on the other end that is mounted to an existing wall and swing door. The Combi uses Boon Edam’s StereoVision 2® detection technology in the ceiling to scan the compartment and ensure a user is alone prior to unlocking the swing door. Security managers can choose to prevent piggybacking for both inbound and outbound traffic.

Enabling Multi-Factor Authorization
The Circlelock Combi enables deployment of multi-factor authentication to ensure the identity of a confirmed, lone user. Users can present their first credential to enter the portal and then a second biometric credential (such as an iris scanner, facial or hand recognition), to unlock the second door. Virtually any verification technology can be mounted inside the Combi on an optional, floor-to-ceiling post.

Applications and Throughput
The Circlelock Combi can process five to six people per minute and is ideal for interior, sensitive locations such as data centers, government buildings, airports, legal or patient record areas, executive suites, and more.

At ISC West, Boon Edam will have the Circlelock Combi available for demonstrations with a two-factor authentication scenario using an AMAG Symmetry card reader to enter the portal, followed by facial scanning technology from StoneLock Pro® to open the swing door. Attendees are encouraged to stop by to see live demonstrations.