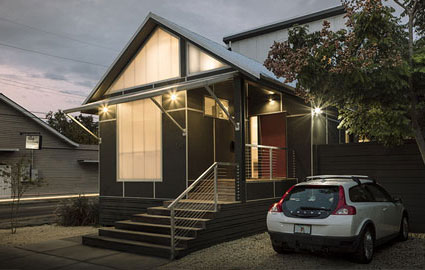 When photographer Richard Sexton was looking to design a home and studio space in New Orleans, he knew he wanted it to have a certain quality of light, but not at the expense of the overall design. His goal was to create a modern and inexpensive space that would take some of its design cues from the shotgun-style homes in the surrounding historic neighborhood, but also convey its own contemporary style.

To echo the historic nature of the homes in the neighborhood, the studio features a large awning that extends across the width of the front facade, providing a reference to the past while also allowing for some needed light control during peak daylight hours. Another consideration Richard had to take into account when considering glazing material options for the window openings was the studio’s location on a somewhat busy corner, and its close proximity to both streets. Because of this, large openings at the front and side of the space, where views from the street would be unfettered, feature IlluminPC™ polycarbonate multi-wall systems for their built-in privacy factor. “Day or night”, he adds, “there’s no need for shades or curtains. Light flows through the panels in both directions while privacy is maintained.” 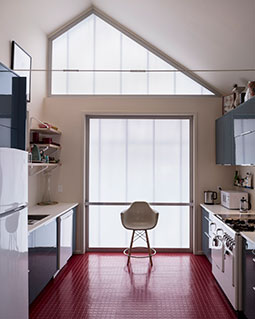 While privacy was important, maintaining an influx of natural light was key. But in the Louisiana heat, it’s also important to find a way to control direct sunlight. IlluminPC™ systems were chosen for their ability to provide soft, diffuse daylight for both living and studio areas, which was important to Richard as he thought about the use of both functions. “I’m a photographer”, he adds. “The character of the light around me is important and it’s this quality I appreciate most in the (IlluminPC™) translucent panels, which are a defining element in the design of the building.”.

After months of planning and construction, Richard Sexton’s home and studio has taken shape and manages to hold on to a touch of old New Orleans while achieving a unique modern style that integrates contemporary materials like corrugated metal siding and polycarbonate multi-wall. “If I only had one word to describe the character of the translucent panels from Major Industries,” he states, “it would be luminosity. The way they filter the light entering the building defines the interior spaces throughout the day. At night, the schema flips and the luminosity flows out to the street in a soft glow.”

If you’re looking for a daylighting system that provides diffuse light, privacy, and a budget-friendly price, consider IlluminPC™ polycarbonate multi-wall system from Major Industries. We’ll be happy to work with you to create a wall, skylight or canopy that meets your needs and budget – just call 888-759-2678 or email us at sales@majorskylights.com.

(Photography by Richard Sexton. To learn more about his photographic work, you can visit his website at https://richardsextonstudio.com/.)