The decision to install Boon Edam entrances was a joint one between Shell’s real estate group and corporate security. “We have four Swinglanes at our front entrance, where employees and visitors arrive, and three at the back entrance, controlling access to the protected area where production goes on,” explained John Logan, Specialist-Security, Shell Chemical LP. 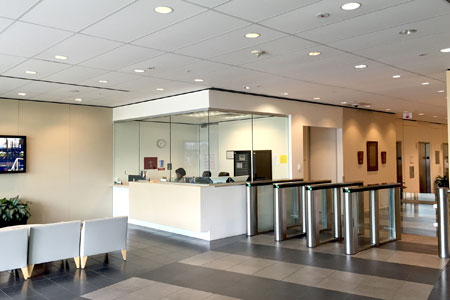 The Deer Park Shell facility is regulated under the Maritime Transportation Security Act of 2002. MTSA security regulations focus on those sectors of the maritime industry that have a higher risk of involvement in a transportation security incident, including various tank vessels, barges, large passenger vessels, cargo vessels, towing vessels, offshore oil and gas platforms, and port facilities that handle certain kinds of dangerous cargo or service the vessels listed above. “Under MTSA, we have to be able to account for who is in the production area, so we need close control of traffic between the administrative building and the plant,” said Logan.

The Shell facility operates at “continuous process” production, so personnel are moving between the two buildings 24/7/365. A refinery has existed at this site since the 1920s. When the turnstiles were installed, Shell did a modest amount of education and explanation for the new entrance protocol, and the transition was rather smooth. The Boon Edam turnstiles manage access for approximately 1600 employees and 1200 contractors per day.

The Swinglane 900 uses a single, swinging panel of glass to control the flow of authorized users. “If there is a tailgating incident,” said Logan, “we’re on top of it within seconds because the turnstiles will alarm and both sets of entrances are constantly monitored for those going in and going out. Our experience has been that any tailgating where we’ve had to intervene have been mistakes, no ill intent.”

“We’ve been very impressed with the reliability of these Boon Edam turnstiles. Since installation in 2008, we have not had a single issue with the entrances. Not one,” Logan reported with satisfaction.