Teamwork Leads to Unique Project at University of Texas

Ellsworth Kelly developed a clear vision for the final piece of his career as an internationally-acclaimed artist. In the building he designed, Austin, Kelly wanted to bend light in different ways through an array of 33 colored windows, 14 black and white marble panels and an 18-foot tall totem, one of Kelly’s common sculptural forms. The project, constructed at the Blanton Museum of Art on the campus of the University of Texas, was hailed by The New York Times as “not just a summation of his work’s themes but his masterpiece, the grandest exploration of pure color and form in a sevendecade career spent testing the boundaries of both.” 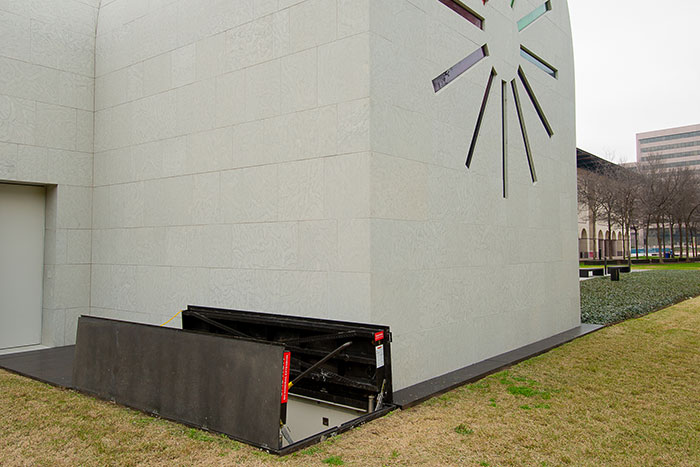 Kelly’s signature project required extreme collaboration with the design team at Overland Partners, construction teams and contractors. While Kelly was brilliant at understanding art, he was not accomplished in building design. “We had to understand who he was and what his artwork was about,’’ said James Lancaster, the project manager for Overland. “It was a process that began with listening. Before we put pencil to paper, we had to become attuned to Ellsworth and his vision for Austin.”

One of the most unique challenges architects faced was concealing the apparatus required for 21st century buildings. Kelly sought to have the art serve as the centerpiece of the exhibit. Mechanical equipment for heating and cooling needed to be concealed. All wiring to electric and technology systems, plumbing fixtur es and all of the other building components also needed to be hidden. There was also a laundry list of items to meet University compliance that required installation – and concealment. “While every aesthetic decision was his, we did not simply abdicate to whatever Ellsworth asked for,’’ said Rick Archer, the Principal in Charge for Overland. “Codes, material selection, constructability, structure and HVAC resulted in modifications to Ellsworth’s original design in terms of t he scale and proportion.”

The largest pieces of equipment for the 2,715-square-foot structure – which cost $23 million to complete – were heating and air conditioning units. The units, roughly the size of an automobile and weighing a ton or more, needed to be installed in an 1,800-square-foot-basement. To accomplish this feat, the project utilized a large custom floor access door manufactured by The BILCO Company. The door was equipped with a special finish on the covers to make them less noticeable from the exterior and a keyed cylinder lock for added building security. The large custom door sits on the outside of the structure, next to one of only two emergency exits in the building and features BILCO’s engineered lift assistance for one-hand operation. “Many people don’t even know where there is access to the basement,’’ Lancaster said. “We had to have access to the basement, but we also had to make the door, as much as we could, invisible.”

Austin delivers precisely the objective Kelly intended when he conceived the project, which he first started working on in 1986. The building opened in February 2018, a little more than two years after his death. “Although the work is not a chapel and has no religious connection, there is something deeply spiritual that visitors experience,’’ Lancaster said. “The interior surfaces serve as a stage of sorts, and the colored windows are the actors.”