This Custom Shading Solution Will Keep Hollywood’s Hottest from Overheating

All attention in Hollywood has recently been focused on awards season. But that is about to change. In September, the new Academy Museum of Motion Pictures will open its doors. And when it does, a tailored Draper shading solution will be working behind—or, rather, above—the scenes to make sure everything stays cool.

The new museum will be located in the historic May Company department store building, which dates from 1939. The most attention-grabbing part of the project is a large glass dome that is attached to the building. According to a recent article in Buildings, this being Hollywood, the large orb includes a 1,000-seat theater. Above the theatre is the open-air Dolby Family Terrace. The overhead glass dome allows some stunning views of the Hollywood Hills. 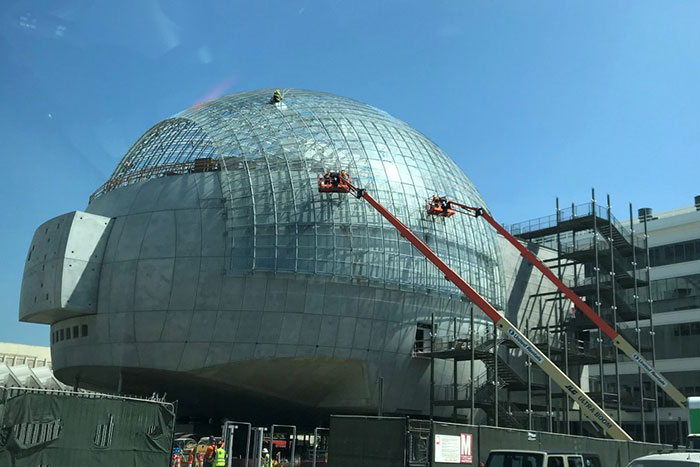 While all of this curved glass created excitement during the planning and construction phases of the project, there were also concerns that sensations of another kind would affect people inside the structure.

“With all of that glass, there was a real concern about solar heat buildup and glare,” said Clint Childress, LEED®AP, solar control solutions product manager. “Imagine being out in the California sun and somebody placing a glass dish over you. That’s the kind of heat impact we were concerned about here.”

Just any window shade wouldn’t do for this project. In addition to the increased expectations of a high profile there was an added layer of complexity in the unique design from architecture groups Renzo Piano Building Workshop and Gensler.

“Window shades are pretty two-dimensional, and with the curve of a dome we had to come up with a way to get around that limitation,” said Childress. “We have done some curved projects in the past but those were fairly simple, with one or maybe two curves. Here we had to find a way to shade a dome curving in multiple directions.”

The Draper Solar Control Solutions team came up with an innovative system that involves several smaller, tensioned skylight shades that match perfectly with the mullions of the dome’s metal support structure.

The motorized units can be deployed at the touch of a button, or react automatically to the sun, so when cameras start rolling and things start heating up the Draper tailored solution will be in place in minutes. It’s a fittingly “behind-the scenes” addition to the magic of Hollywood—a proper contribution to what is, according to the Buildings article, “the first large-scale museum in the U.S. dedicated entirely to the art and history of filmmaking.”