Just four years ago, a survey of NBA teams’ fan experiences, from accommodations to concessions, ranked the Minnesota Timberwolves’ game day experience the worst in the league — but a new $145 million Target Center arena redesign has dramatically elevated locals’ perceptions. 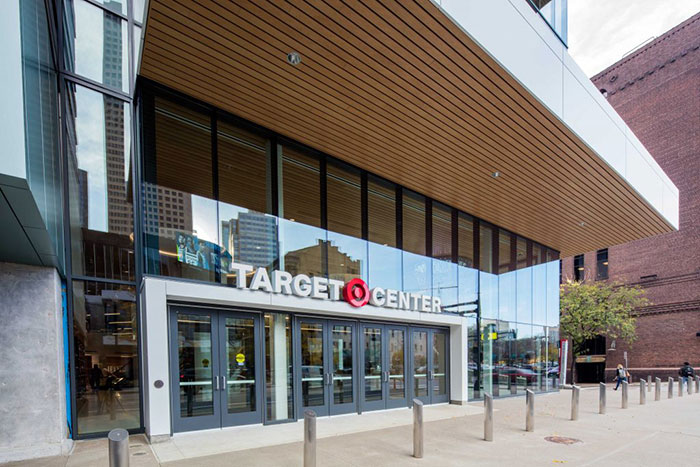 To achieve success on another, community-driven spectrum, Jeff Münneke, VP of the organization’s fan experience, attended the Disney Institute to learn how to apply Disney’s interactive and loyalty-based experience to the Timberwolves. What resulted was “1 Program,” anchored in the belief that one moment or interaction has the opportunity to leave a lasting impression on fans from customer service to the aesthetic design of the team’s home turf. 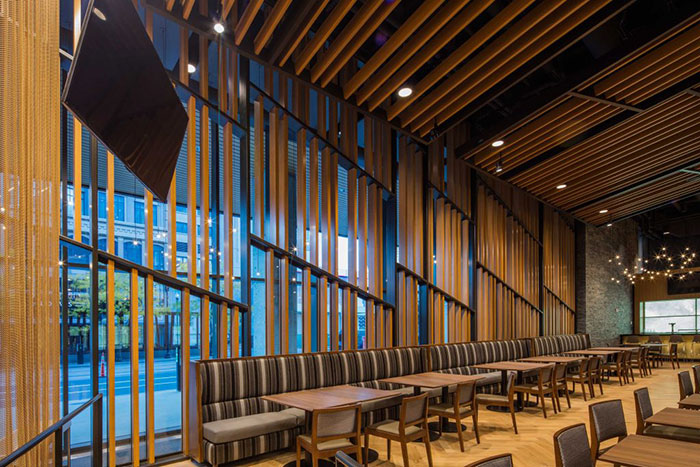 Architects worked with general contractor Mortenson Construction on the relatively quick turnaround project, which touched nearly every surface of the space. From stages of shop drawings to submittals to final installations, collaborators executed the bulk of the new Courtside Club design from roughly November 2016 to November 2017.

And because any potential delays threatened to disrupt basketball season, it was particularly critical for the architects, contractors and manufacturers to communicate and create a seamless process, including in delivering materials to the bustling downtown Minneapolis site. Scott Gallop, of Twin City Acoustics, coordinated with Hunter Douglas Architectural to install standard, light wood-toned Deep Box Series panels in the entrance’s exterior and in the interior ticket lobby areas.

Gallop’s team later installed the manufacturer’s more complex, high-style customized High Profile Series™ Frameworks ceiling system, a distinct design detail inside the club. With a race to the finish line, remarkably, Gallop says the whole team was able to meet their deadline by one day.

Installing Hunter Douglas’ custom-designed, engineered and fabricated extruded Frameworks beams, which are roughly 24-feet high, meant working around assorted electrical and mechanical systems, and planning for some to be removable for future access to the deck.

Twin City Acoustics installed the series of clips and beams with seamless joints, which had to be mitered correctly to fit the perimeter framework.

The architect envisioned a more open, brighter space with wood-wrapped beams traversing from the ceiling down to the wall, adding a wood look to warm to what was then a dark and aging facility. For practical purposes, it was also important that the elements be lightweight. 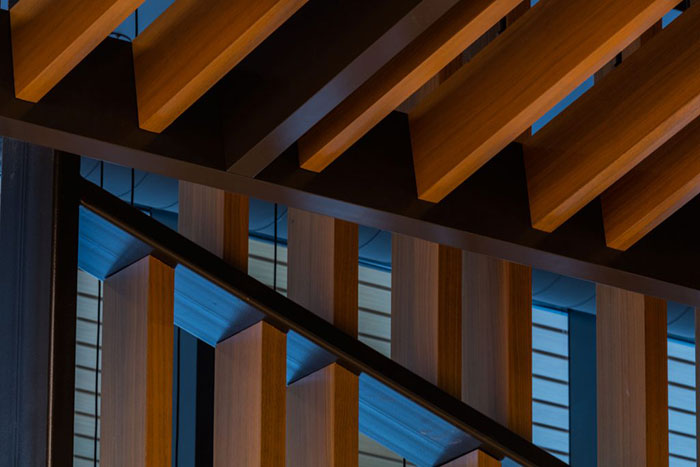 Gallop explains, “It was a vision that the architect had and Hunter Douglas was able to put it together” by custom-engineering the Frameworks system. “Ultimately we didn’t really change anything that the architect wanted, we just figured out a way to do it. Sometimes, that’s the best way things can happen – we get an architect’s vision and they allow us the latitude to get it done.”

He explains that the architects provided Hunter Douglas drawings showing bays of arranged light wood-wrapped extruded beams, which in-house experts engineered – and later adjusted when the architects changed plans to create the walls from durable structural steel that was then in-filled with Hunter Douglas’ aluminum beams.

This area features 970-sq.-ft. of screen wall beams and 3,352-sq.ft. of aluminum ceiling beams of varying lengths. “The end result was stunning,” Gallop smiles, “You can’t do that out of bent metal – that needed to be done out of a real heavy extruded system that was wood-wrapped.” 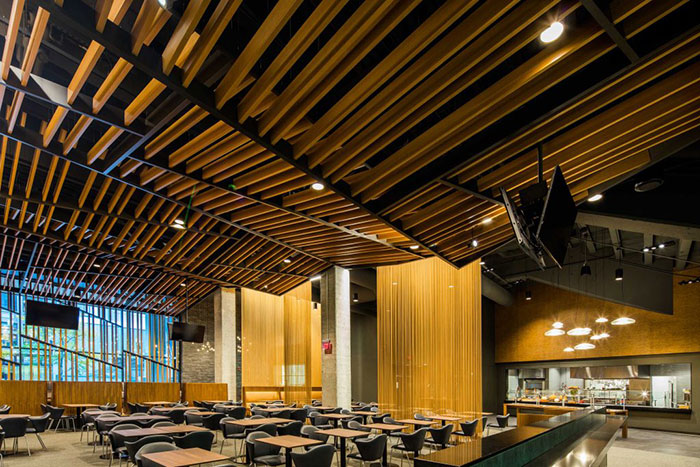 “The architects really wanted wood and that’s what we gave them,” says Gallop, who adds that on the manufacturing side, Hunter Douglas Architectural’s in-house team of engineers “are the only people that can do a wood-wrapped beam like that.” He recalls other manufacturers “wanted to go with a painted faux finish which looks okay, but it’s not a real wood, and some powder-coated finishes, if you’re a few feet away, really do look like wood, but it’s still not wood.” In the end, by meeting the architect’s original concept, Gallop says, “everything worked beautifully and everybody’s happy.”

Gallop is quick to credit Hunter Pope, Hunter Douglas’ architectural ceilings sales manager, with interpreting the architectural drawings, engineering the large-scale ceiling system and accurately mitering each beam. “Hunter Pope is outstanding. It was an engineering marvel that this all got installed as soon as it did and as easily as it did,” Gallop notes.

More than ever, Pope says architects are coming to contractors and manufacturers with highly specific visions and needs, and are relying on manufacturers’ ability to apply a signature application to a standard product. This dynamic also trickles down to the manufacturers’ need to maintain close working relationships with installers like Twin City Acoustics, who he says “were easy to work with and made it a lot better to do this job.” 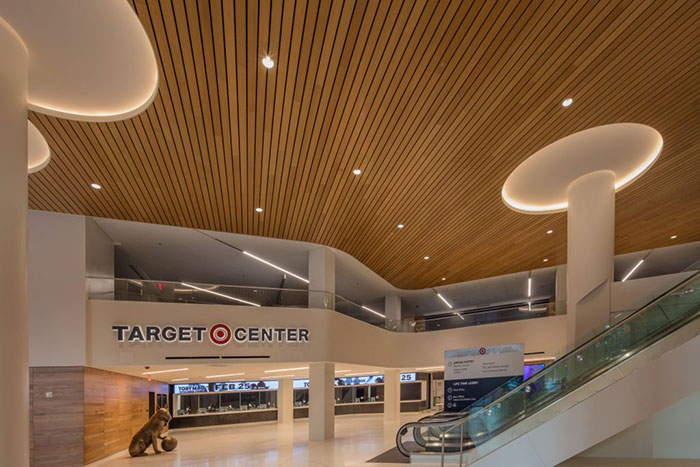 “With Target Center I had a lot of involvement with the architect, so I knew their design intent,” Pope recalls. Hunter Douglas was already awarded the Deep Box Series project at Target Center’s entrance. This was far less complicated yet still required a degree of nimbleness: it features a standard carrier system for Deep Box panels, which are 1-inch deep, but here, the architect actually wanted 2.5-inch deep panels. Overall Pope says, “there were no real challenges with that – it was pretty simple, but there were miles and miles of it.” 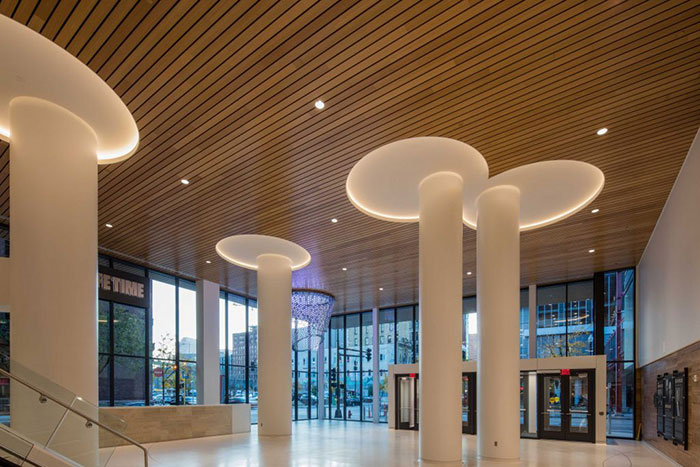 For the Lexus Courtside Club area, after architects searched and came up empty-handed, they circled back to the Hunter Douglas team, looking for a manufacturer that could develop the wood-wrapped peaked ceiling elements and in-fill wall beams system within their time frame. High Profile Series™ Frameworks fit the ticket and allowed for maximum design flexibility.

New to the marketplace, Frameworks was designed to give architects more creative freedom with a customizable series of bays and pods of beams that formed seamlessly connected “peaks and valleys” with concealed joints. The system, which had just been installed in national Target liquor stores and in Gensler’s redesigned concourse of Nassau Coliseum, offered a new solution that met the architect’s original design intent. 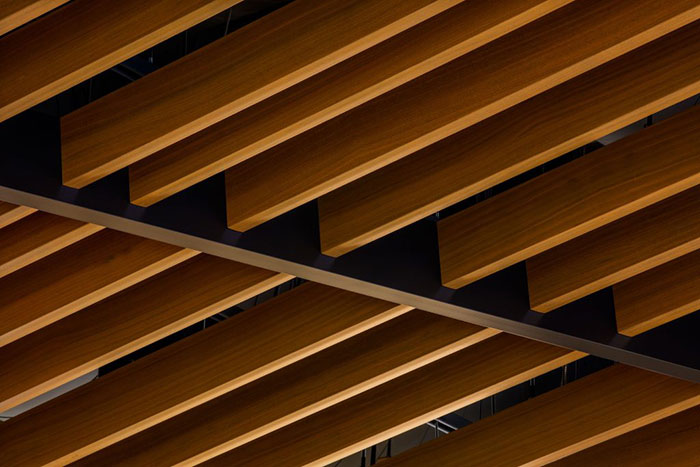 “While it didn’t start with this project, the idea behind Frameworks was that we kept seeing a trend towards these floating bays and pods, whether it be linear, beams, panels, it didn’t matter, it was about this trend of, rather than going wall-to-wall, creating a pod or a floating ceiling cloud,” says Pope. The system strikes the perfect balance between letting angled beams be a transparent and eye-grabbing design element, while keeping the mechanics of connecting joints unexposed.

“With this job, we saw just another challenge that we wanted to tackle – it was more complex, it had more angles, they were sloping in two different directions and there were a lot more brackets, miters and different angle cuts, but in the end, we had to conceal all of that in order to make it look like a floating pod, so that’s the idea behind Frameworks here,” says Pope, adding, “There’s no standard for it – it can be extremely basic or extremely customizable.” 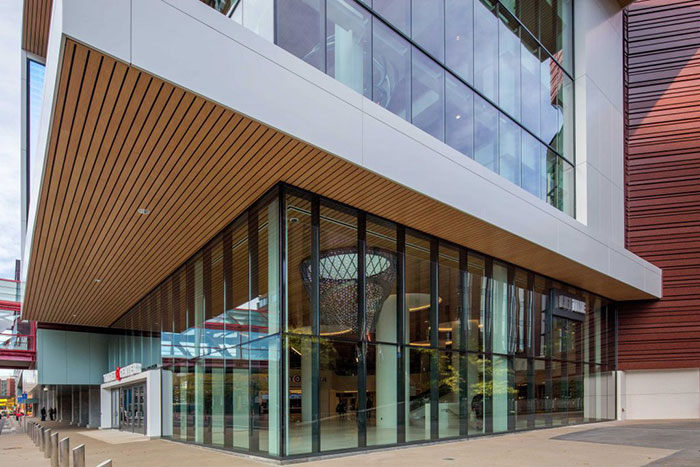 “The wood gives it more of a homey, light feeling,” says Pope, as opposed to being in a space that’s traditionally dominated by “harsh colors” and darker grays, blues and blacks. “It gives it more of an intimate feeling when you’re in these spaces… Most people think of an arena as this big, structural steel place, and so you want to go into certain environments and make it so it doesn’t feel so harsh. Wood has always offered that warm feeling.”

He also attributes the uptick in sports venue designers specifying wood-wrapped aluminum beams due to the lightness of material that can be delivered without compromising aesthetics.

“It looks the exact same as a real piece of wood. It doesn’t matter if it’s veneer or decorated or film, it has that essence of it being a wood feel in that environment,” says Pope. He explains that using metal or light-gauge aluminum with a wood finish works well in massive arena-like settings where architects must account for heavy loads and prefer less weight adding pressure on the plenum yet ultimately still want to see their design goals met.

At Minneapolis’ reimagined Target Center, Pope says, “You can’t even tell that it’s wood on metal – that’s something that Hunter Douglas prides itself on.”