The June 2018 inauguration of the Rostov Arena in Rostov-on-Don, Russia, in a new venue for this summer’s FIFA World Cup™ underlines the role PENETRON crystalline technology has played to ensure enhanced concrete durability and a longer life cycle for the massive concrete structures in many of the 12 World Cup stadiums across Russia.

“Over the years, Penetron has been behind countless large sports stadium projects, the kind that demand significant experience in the construction of complexes used for global sports events,” explains Robert Revera, President and CEO of The Penetron Group. “For example, our crystalline technology was used for the Summer Olympics 2008 in China, the FIFA World Cup 2010 in South Africa, the Sochi Winter Olympics 2014 in Russia, and the last FIFA World Cup in 2014 in Brazil – just to name some of the highlights.” Held every four years, the FIFA World Cup is the biggest single sports tournament in the world. This year’s World Cup will be hosted for the first time by a country from Eastern Europe. Thirty-two national men’s teams from around the world will converge at 12 venues across European Russia (June 14 through July 15, 2018) to play for soccer’s highest honor.

The world's largest country (by area) with a population of over 140 million, Russia has invested over $10 billion to host the FIFA World Cup 2018. The tournament will be held in 11 cities across three different time zones. The westernmost host city – Kaliningrad - and the easternmost host city – Yekaterinburg – are 2,000 miles apart, farther than the distance between Los Angeles and Chicago. All World Cup 2018 venues are located in cities in the European region of Russia to reduce travel time for the teams crisscrossing this huge country.

The old Central Stadium in Yekaterinburg was completely renovated for the World Cup; the new Ekaterinburg Arena, with a 45,000-seat capacity (expanded for the World Cup with temporary stands), soars above its predecessor but retains the old façade, an architectural legacy with decorative features typical of the Soviet Neo-Classicist style.

Penetron Ural, Yekaterinburg’s Penetron dealer, previously worked on the adjacent underground parking garage, also built for the World Cup. Mixed into the concrete during batching, PENETRON ADMIX was used to treat all the concrete for the stadium’s parking garage. PENETRON and PENECRETE MORTAR were also applied to ensure the impermeability of the treated concrete structures.

“In some cities, the soccer stadiums were built completely new for the World Cup and many of these projects were under severe time constraints,” adds Igor Chernogolov, President of Penetron Russia. “Fortunately, PENETRON crystalline materials quickly provided not only a reliable waterproofing solution, but also helped significantly reduce construction time.” 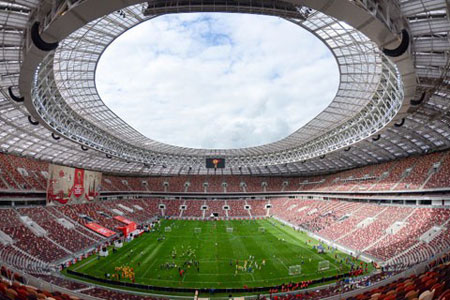 Russia’s most famous soccer stadium underwent a comprehensive renovation that also preserved the stadium’s historical façade, a Moscow landmark. Extra bleacher tiers were added, increasing seating to 80,000. PENETRON and PENECRETE MORTAR were topically applied to waterproof all the new concrete for the stadium walls and increase the durability of the concrete slabs of the spectator seating areas. 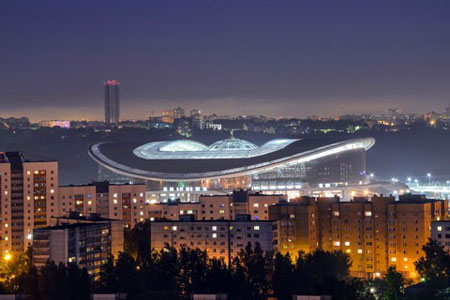 Designed by Populous, the architects behind Wembley and the Emirates stadiums in England, this venue hosted the 2013 Summer Universiade sports event and the Confederation Cup 2013. It features the world’s largest (4,030 m2) outdoor high-definition screen and has a 45,000-seat capacity. PENETRON topical materials were applied to repair the concrete structures during renovation work completed five years ago. 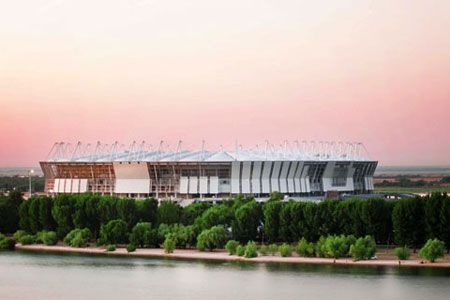 This brand-new 45,000-seat facility, built on a 40-hectare site on the shores of the Don River, went through many changes. The riverside location made a reliable waterproofing solution necessary. Penetron Don, the local Penetron company, helped contractor Krokus International treat over 200,000 tons of concrete used for the stadium structures. Applying PENETRON ADMIX and PENEPLUG helped to “significantly accelerate the pace of the construction.” 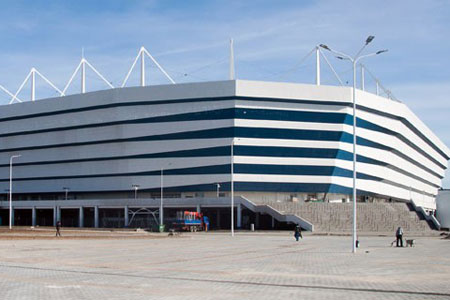 Situated on Oktyabrsky Island, this brand-new 35,000-seat facility also underwent many adjustments due to the wetlands location. Hydrostar, a Penetron dealer, provided PENETRON ADMIX to waterproof the below-ground structures against groundwater. PENETRON and PENECRETE MORTAR were used for repair work in the stadium and the adjacent wastewater treatment plant. 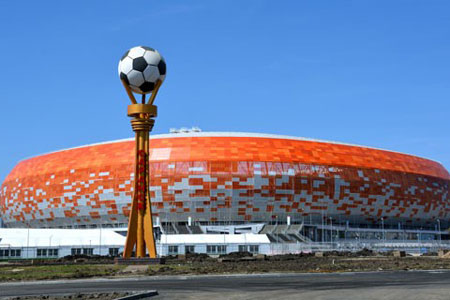 Located in the center of Saransk (close to the railway station and a new airport), on the banks of the Insar river, the new Mordovia Arena features a 45,000-seat capacity and a brightly colored exterior. Hydrostar provided PENETRON and PENECRETE MORTAR as a topical waterproofing solution for the high water table. 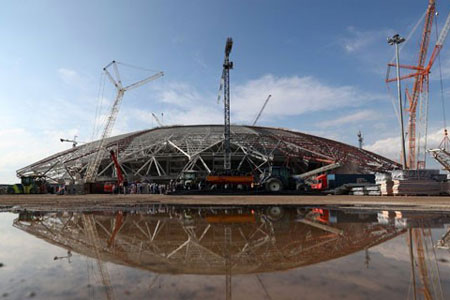 With a 65 m (215-feet) high glass dome, the 45,000-seat Samara Arena is one the World Cup’s most striking venues. Izosystema, the Penetron dealer, persuaded the contractor to opt for a PENETRON topical waterproofing treatment (PENETRON and PENEBAR SW) for both stadium and adjacent wastewater treatment plant (that serves the stadium and region).

As shown with the process of building a network of sports venues in Russia for the FIFA World Cup, the construction of sports stadiums is costly. This magnifies the importance of a reliable and effective concrete waterproofing technology. For example, as the world’s most efficient and economic permeability-reducing concrete admixture (PRAH), PENETRON ADMIX provides comprehensive protection against concrete deterioration and can significantly increase the service life of concrete structures.

“The World Cup enjoys an immense popularity around the world. The modern sports facilities are an important part of this incredible tournament,” adds Mr. Revera. “That’s why developing more durable and long-lasting concrete structures has been the central focus of our company for over 40 years. Our record of success in the construction of large infrastructure projects like the World Cup sports stadiums speaks for itself.”