Like an alien funhouse, the multi-domed ceiling of the subterranean Amos Rex art museum pushes up from below Helsinki’s Lasipalatsi plaza to create an interactive outdoor playscape. The plaza features five mounds of varying sizes, each equipped with large portholes that serve the dual purpose of providing passersby with a glimpse of the artistic treasures below and provide abundant natural light to illuminate more than 2,200 square meters (23,680 sq. ft.) of columnless galleries. 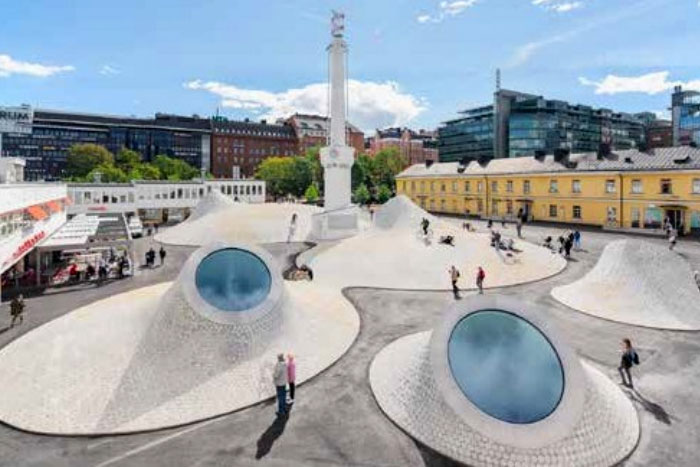 Planning for the new museum began in early 2013 when the Föreningen Konstsamfundet art foundation, established as the bequest of philanthropist newspaper publisher Amos Anderson, began the search for a new home for the Amos Anderson Art Museum. The nearby functionalist-style Lasipalatsi (glass palace) building offered an inviting home but, due to its historic significance, could not be modified sufficiently to accommodate the entire museum.

Helsinki-based JKMM Architects proposed a bold plan to renovate and incorporate the Lasipalatsi complex, including the 590-seat artdeco Bio Rex theater, with a new subterranean art museum under Lasipalatsi square. The art museum site was a vacant, paved plaza that formerly served as a bus station and military parade ground. JKMM’s plans called for a twostory deep excavation of the plaza that required the excavation of nearly 500,000 cubic feet (14,000 m3) of soil and bedrock.

The museum would feature a main gallery floor and a lower level for art storage and mechanical equipment with the two floors connected by stairs and an elevator. Steel reinforced concrete footers, floor slabs, and walls were used to form the main structure. The roof of the museum was built with 20 centimeter thick steel reinforced concrete, a thick insulation layer, glass foam fill, and a top layer of exposed concrete provides a base for tiled domes and asphalt.

A major concern for the project manager and JKMM design team was the need for absolute moisture resistance in the concrete foundation and walls. At a depth of 14 meters (45 feet), the foundation would be at least seven meters below the average water table for that area and facing constant hydraulic pressure. The plan to use the lowest level of the museum for the storage of art and equipment meant that any influx of water through the foundation could result in a costly disaster.

The design team considered many waterproofing options, including membranes, coatings, and concrete additives. “Other companies came forward claiming to be comparable to Xypex; however, our track record on a global scale with similar deep-foundation projects convinced them that we were the right choice,” notes Ronald Sulin, Xypex sales manager for Finland. “We also demonstrated our confidence in our product by providing a 15-year warranty, which no other manufacturer could match.”

Xypex Admix C-1000 NF was selected to provide a normal to mildly delayed set. Admix C-1000 NF is added to concrete at the time of batching and consists of Portland cement and various active, proprietary chemicals that react with the moisture and the by-products of cement hydration to cause a catalytic reaction that results in the formation of non-soluble crystals that fill the natural pores and capillary tracts in concrete. This crystalline formation prevents the penetration of water and other liquids from any direction.

Admix C-1000 NF becomes a permanent and integral part of the concrete structure and continues to work to prevent the ingress of water and other liquids for the life of the structure. Admix C-1000 not only permanently seals the concrete and can heal hairline cracks up to 0.4 mm, it also provides chemical resistance properties that mitigate the attack of chlorides, sulfates and the effects of carbonation and alkaliaggregate reaction.

Project engineers consulted with Xypex Technical Services to determine the optimal dosing for Admix C-1000 NF for the concrete used at varying depths in the foundation. For instance, the lowest and most hydraulically susceptible structures—footings, slabs and elevator pit— received the highest dose of Admix C-1000, which was 5 kg/m3. The lower level (storage area) concrete walls were dosed at 4 kg/m3, and the gallery level walls (just below ground level) were dosed at 3 kg/m3.

“The project saved money by varying the dosage based on the projected hydraulic pressure at different depths,” Ronald Sulin explains. “The water table in that area is quite high. Pumps were used during construction, before concrete was poured, to continually keep water out.”

An estimated 1,500 cubic meters of concrete was treated with Xypex. The addition of Xypex Admix to the concrete used for the walls of the new museum did not impact the production, delivery, and placement of concrete in any way. By including primary waterproofing as an integral part of the foundation, the project saved the time that would have been required by other waterproofing systems such as membranes or coatings.

An added benefit in using Xypex is that it typically increases the compressive strength of concrete and allows the crack tolerance for walls and other structures to be increased. In many cases—including the Amos Rex project—less reinforcing steel can be used thereby enabling easier and more effective concrete placement and vibration.

According to Sulin, the addition of Xypex Admix C-1000 NF allowed the museum project to move ahead without the delays that other waterproofing products would have introduced thereby savings time and money. “Not only does Xypex meet the immediate need for a concrete waterproofing solution, but it also delivers long-term benefits by providing a one-time application that never needs to be repeated or renewed. It provides active protection throughout the service life of the concrete.”

The Amos Rex Art Museum—named by combining the name of the Bio Rex movie theater with first name of museum founder—opened on August 30th, 2018, and handled more than 10,000 visitors in its first week of operation. The five-year $64-million project has been a huge success that has revitalized an historic area by fusing the old and new to create an emersive and inclusive experience above and below the Lasipalatsi Plaza.