CableRail Optimizes the View at a Stunning Riverside Home

The following content was originally published here. All photos courtesy of Feeney Inc.

In 2017, Rusty Alexander and architect Phil Kean were collaborating on a 10,000 square foot contemporary residence nestled just above the Tennessee River in Muscle Shoals, Alabama. For Alexander, owner of both Alexander Homes and its design counterpart, RiverWorks Design Studio, this wasn’t just any residence. It was to become his future home, which would aptly come to be known as Sweet Home Alabama.

In building his dream home, Alexander wanted to bring the space to life by creating a unique experience in every room. "We set out to achieve a warm, modern lake feel that that excited all of the senses and had a truly memorable ambiance."

At the same time, it was important that the home appear to seamlessly merge with the nearby landscape. Alexander and his wife are lovers of nature, so the design team chose to employ techniques that would evoke a sense of the outdoors, even from inside the home. This approach was inspired by Frank Lloyd Wright’s philosophy that buildings should serve to honor and enhance the natural beauty surrounding them. The goal was to remove any barriers between the interior and exterior by utilizing materials that encourage a blending of the two. To help make this vision a reality, Alexander and his team installed floor-to-ceiling windows that provide a welcoming view of the river as well as automatic sliding glass doors that disappear into the walls to open up the space to the outdoors. To create an organic look, stone from the nearby river bluffs was used for the home’s vertical walls and for the interior and exterior horizontal surfaces. Kean had previously used CableRail by Feeney and had been pleased not only with the clean, streamlined aesthetic but also with the ease of working with Feeney. The decision was made to install Feeney’s DesignRail® aluminum railings system with 1/8" CableRail infill for both the interior and exterior railings.

Notes Alexander, "We felt the sleek horizontal lines would accentuate the modern appearance of the home, enabling the indoors to effortlessly connect with the scenic outdoors. That was a very important consideration." 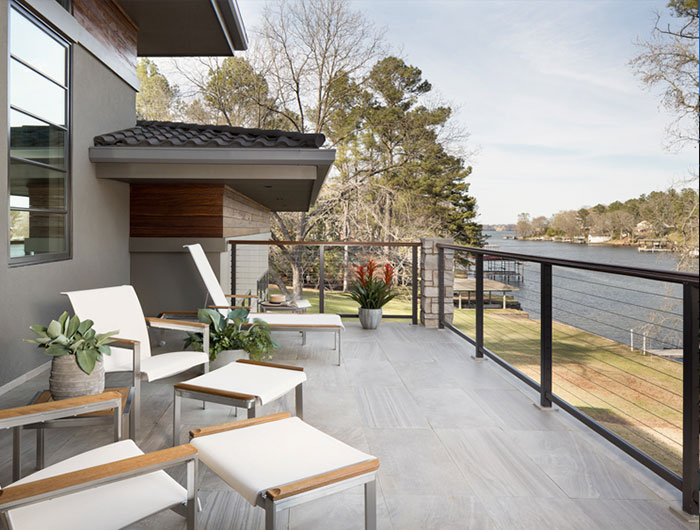 Alexander says the final result met his expectations and then some. "The railings truly seem to ‘disappear’ – both when looking from inside the home toward the river and when arriving at the residence by boat. It’s great to be able to enjoy an unobstructed view from anywhere, including from the waterside. My wife and I are fortunate to be able to experience panoramic vistas of the Tennessee River from every room, and that really makes this home special."