The following content was originally published here. All photos by Matt Edgar (courtesy of Feeney Inc.).

The city of Oconomowoc, Wisconsin set out to revitalize the town’s waterfront, which would involve a significant overhaul of the existing public space, including replacing the railings at the perimeter of the shoreline and adding railings to a newly constructed t-shaped fishing pier. The city enlisted Milwaukee design and engineering firm Stantec to specify the railings.

Challenges in selecting the new railing solution included the high level of moisture on the lakefront, which could cause the railings to degrade over time, as well as the tendency for cups and bottles to fall into the lake when placed on the railings. In addition, constant public use would make the railings susceptible to wear and tear. Moreover, because the metals in the previous railing system had been mismatched, the railings had become corroded where the dissimilar metals met, requiring the city to repaint the steel posts every couple of years.

Design engineer Kevin Kimmes was tasked with finding a railing solution that would be durable, resistant to the elements and require minimal maintenance. It was also important that the railings be unobtrusive and provide a clear view of the lake and surrounding area.

To provide maximum visibility and create an attractive aesthetic for evening visitors to the boardwalk, Kimmes recommended installing a railing system that included lighting for both the top and bottom rails. In addition, council members preferred colored railings, which would help to create a cohesive look on the lakefront and complement existing architectural elements while eliminating the need for repainting. 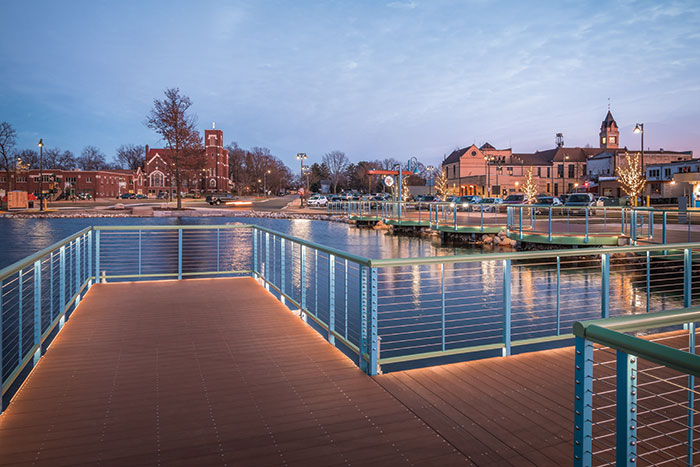 Kimmes and his team decided on cable rail infill due to its weather-resistant stainless steel construction and ability to provide an unimpeded view. They also liked the idea of powder-coated aluminum railings, which would minimize maintenance. After careful consideration, the firm selected Feeney’s DesignRail® aluminum railing system with CableRail infill and LED lighting.

“Feeney had the right connections and materials between posts and cable rails, which provided valuable peace of mind,” explained Kimmes. “The company also stood out for their work in maritime environments. Feeney’s AAMA-2604 compliant powder coating process for aluminum and their stainless steel products are great for saltwater environments, even better in freshwater applications.” 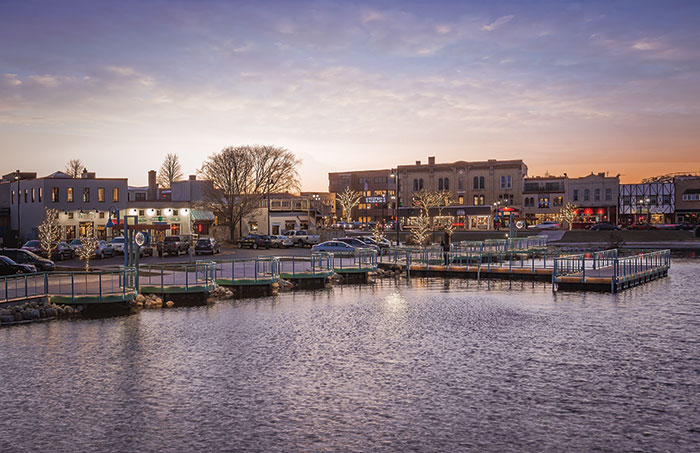 In addition, the team liked the soft, even lighting provided by Feeney’s LED lighting system and the ability to specify railings in custom colors. To help prevent boardwalk visitors from placing food and drinks on the railings, the firm selected the DesignRail® elliptical top rail style.

The final result has paid dividends. Visitors to the lakeshore can enjoy a clear view of the lake from any vantage point as they stroll along the boardwalk, and the increased pedestrian traffic has transformed the waterfront area into a major business development hub for merchants.