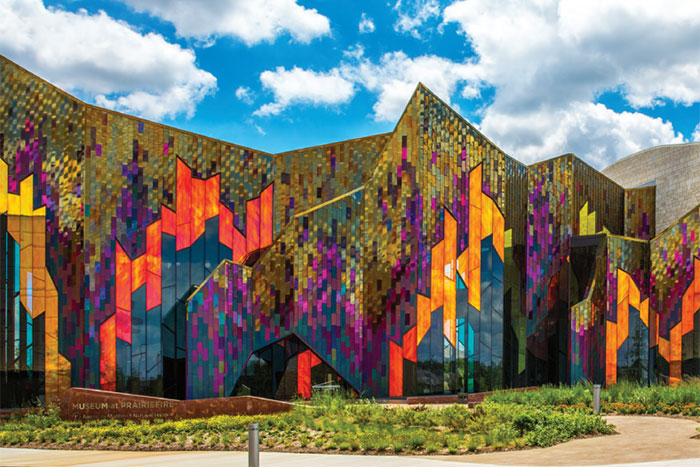 Established in 2010 as part of a partnership with the American Museum of Natural History (AMNH), the Museum at Prairiefire (MAP) is the centerpiece of a 60-acre mixed-use development in the Kansas City, Kansas suburb of Overland Park. MAP owner Merrill Companies, LLC, wanted a design as distinctive as its offering for visitors to view cutting-edge, world-renowned exhibits and artifacts from the AMNH.

Boston-based Verner Johnson, Inc. joined the project to generate conceptual drawings. Lead project architect Jonathan Kharfen, AIA LEED senior associate, took notice of the local practice of controlled prairie burns. These seasonal planned fires work as a rejuvenation tool, eliminating excess leaf litter and making it possible for plants to flower, produce seed and grow. With these images as inspiration, his team presented a concept reflecting the imagery of the tallgrass prairie, including one of its most unique aspects: prairie fire burns.

Kansas City-based JPI Glass served as the glazing contractor and self-performed all of the glass and glazing requirements for the complex project. The museum, dubbed “The Jewel of Overland Park,” is LEED Silver® and has received rave reviews since opening.

The expansive lobby is enclosed in “lines of fire” – faceted vertical planes composed of tinted vision glazing, dichroic glass and iridescent stainless steel panels set in a composition invoking flames. The glass and steel shift color depending on perspective, creating a vibrant, animated glow of color around the building. MAP is the only building in the United States to feature dichroic glass. The glass was manufactured by Goldray Industries using 3M film originally developed by NASA.