AMBICO Limited is a family-owned manufacturer of engineered and decorative door and frame products that designs its products in Ottawa, Ontario, and manufactures them in Canada as well as under license in Seoul, Dubai, Riyadh and Doha. So it was quite an opportunity in 2012 to meet with the architect and design team charged with the development of the once-in-a-lifetime, $1 billion retrofit of the entire Parliamentary Precinct right in the company's home town, Canada's capital city.

Ottawa is a stunning city which benefits from being the seat of federal government and the home of dozens of Canadian government departments. From the Parliament Buildings themselves built between 1870 and 1930, to the Supreme Court of Canada, the Bank of Canada, the National Arts Centre and a multitude of other buildings, the City of Ottawa is made interesting by the many architectural styles incorporated into these grand structures.

Parliament Hill is located in the central core of the city and occupies pride-of-place between the Ottawa River and Wellington Street; arguably Ottawa’s most historical thoroughfare. Several years ago, the Canadian government set out to purchase all the independently-owned buildings on Wellington Street, which boasts the addresses of the city's focal properties. The gem of these acquisitions is an iconic structure, mere steps from the House of Commons and The Senate of Canada—the former flagship branch of the Bank of Montreal, now known as The Sir John A. Macdonald Building.

It is situated at the heart of the Parliamentary Precinct. It is because of its prime location that this structure alone was designated for a $100 million renovation and retrofit. The building is now sitting, like a newly crowned beauty queen, waiting to host Parliamentary and Senate meetings and functions, international gatherings, special ceremonies and extraordinary state events. 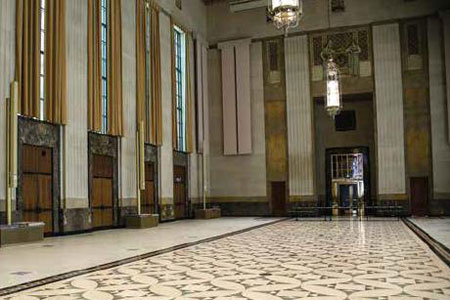 AMBICO's expertise in restoration projects of this type has been well established globally, having provided state-of-the-art door and frame products for historic structures in Washington, Jerusalem, London, Dubai and Vancouver. In this instance in Ottawa, monumental STC 52 wood doors were designed to meet speech privacy requirements in 85-year-old halls. In one instance, they were designed to provide the unique requirements for a high-security meeting area nestled in an area of refuge that was both acoustically perfected for delicate talks between heads of government and physically impervious to terrorist attack. Bullet-resistant door and frame assemblies were required not only to meet the stringent requirements of UL 752 but the demanding requirements of the heritage architect and the unique decorative demands of the classic structure.

The construction management firm contracted to oversee this project included detailed pre-planning, consultant collaboration, architectural design, preservation architecture, seismic upgrading, new construction, restoration of the roof and the exterior, electrical, mechanical and life safety systems; and security risk contingencies, as well as integration of state-of-the-art IT and multi-media. Approximately 600 private sector jobs were generated over the duration of the project between 2012 and 2015.

In conjunction with the restoration of the former banking institution, an all-new atrium provided a transition between the original structure and what was formerly an outdoor courtyard and garden area. Although it was designed to meld with the modern classicism of the main structure, for the banking structure to retain its historical heritage designation, the two areas and their individual designs remained distinct.

Formerly the tellers and banking area, this view provides a perspective of this magnificent building which lends itself beautifully to formal gatherings and events.

AMBICO’s worldwide reputation for the manufacture and supply of door and frame assemblies, as well as the completion of landmark historical restorations such as the Victory Building in Winnipeg, Manitoba; the Eisenhower Executive Office Building in Washington, D.C.; and the Bronx Community College in New York City, made it a natural choice to supply the restoration doors and frame able to meet the demands of the project. These included: acoustic and bullet-resistant steel doors and frames and stone-clad doors and frames; acoustic steel doors; acoustic and bullet-resistant walnut veneer doors; and acoustic fiberglass reinforced polyester (FRP) clad doors.

Each door type presented unique challenges; every door and door assembly would be designed and manufactured to fit seamlessly into its historic context and exceptionally decorative surroundings. AMBICO’s engineering and design team met every challenge proposed by the architectural team, including:

AMBICO was also charged with the creation of STC doors to match new FRP doors from a third-party manufacturer and that were required for the back of the house. Although AMBICO had never manufactured a door with FRP veneer, and especially one that needed to provide STC 52 acoustic performance, the company's engineers modified steel acoustic cores, designed new aluminum extrusions, coordinated with FRP composite manufacturers and successfully tested new STC product. The result was a seamless integrat-ion of impact resistance and acoustic performance.

AMBICO’s engineering and design team designed several wood veneer doors; all of which are performance rated to STC 52. Incorporating this acoustic level into doors in singles, pairs, with transoms and other surrounding features, provided the team with a number of challenges. Design time over an 18-month period was required to meet the architect’s challenging specifications for these doors openings.

The building design itself integrated levels or series of doors with “crush space” areas in between them, designed to insulate against sound transmission between open areas and meeting, event, and board rooms.

Adding to the complexity of design, the doors themselves included: pivots, located at tops and bottoms of the doors, with intermediate load-bearing pivots as well; concealed operators; and concealed, vertical cable exit devices.

AMBICO was pleased to play a role in the renovation of this beautiful and highly regarded heritage property in Canada’s capital. This project is a superlative example of the role played by door and frame assemblies, in a building of this stature, providing openings that meld seamlessly into uniquely patterned marble, granite, slate, wood paneling and other materials, which were chosen many decades ago by discerning architects and designers.

The results are spectacular, unique and a testament to the collaborative spirit of architect, engineering and construction professionals and distribution, when required to work collaboratively with the precision and expertise of experienced manufacturing personnel.